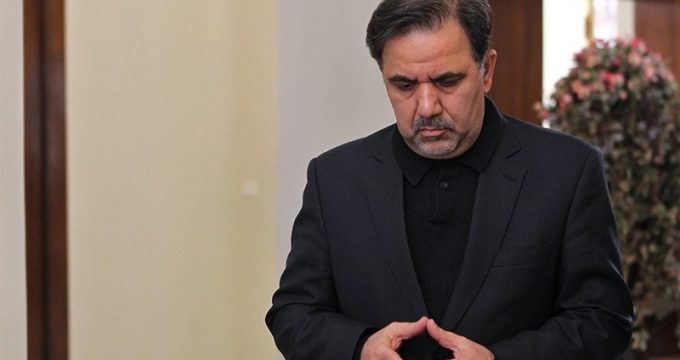 FNA – Iran’s Transportation Minister Abbas Akhoundi underlined the necessity for activation of the North-South corridor in the Eastern and Western parts of the Caspian Sea, and asked Moscow to facilitate issuing permission for Iranian vessels to sail through the Russian waters.

Akhoundi made the remarks in a meeting with his Russian counterpart Maksim Yurevich Sokolov in Moscow on Sunday.

During the meeting, the two sides discussed ways to further expand mutual cooperation and ties.

Akhoundi, for his part, described the two countries’ cooperation in building railways as positive and growing.

He also urged the Russian side to adopt the necessary measures to facilitate affairs related to issuing permission for the Iranian vessels’ trafficking in Astarakhan port and the Russian waters.

In a relevant development on Friday, Akhoundi and Russian Minister of North Caucasus Affairs Lev Kuzentsov in a meeting in Moscow called for enhancing mutual cooperation in economic and trade fields.

During the meeting in the Russian capital, Akhoundi and Kuzentsov called for enhancing cooperation between Caucasus and Iran’s Northern provinces.

Akhoundi said that enhancing cooperation would lead to flourishing the shipping industry in the Caspian Sea within framework of mutual cooperation as well as establishing commercial and passenger flights between the North Caucasus and Iran’s Northern provinces.

Kuzentsov, for his part, called for more cooperation between Iran and the Muslim majority provinces and Republics o Russia on agriculture and food products, arguing that Halal industry is just one of the potential fields for cooperation between the regions and Iran.