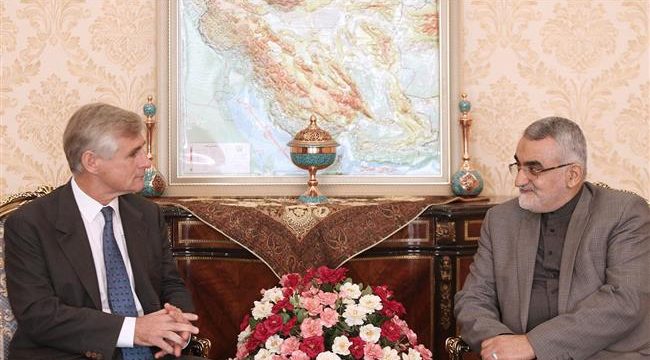 Austria and other European countries are standing by Iran through their support for the nuclear accord, known as the Joint Comprehensive Plan of Action (JCPOA), Secretary General for Foreign Affairs at Austria’s Foreign Ministry Michael Linhart said in a meeting in Tehran on Sunday with Chairman of the Iranian Parliament’s Committee on National Security and Foreign Policy Alaeddin Boroujerdi.

He added that Vienna and other European capitals would never allow any self-willed measure to pose a threat to the JCPOA.

US President Donald Trump delivered an anti-Iran speech on October 13, in which he said he would not be certifying Iran’s compliance with the terms of the JCPOA under a domestic American law and warned that he might ultimately terminate the agreement.

In a closed-door meeting, chaired by European Union foreign policy chief, Federica Mogherini, in Luxembourg in mid-October, EU foreign ministers reaffirmed their support for the historic nuclear agreement, saying the accord was working and was a key component of non-proliferation efforts.

After the meeting, the foreign ministers issued a statement, expressing their determination to fully implement the international nuclear agreement.

Elsewhere in the meeting, the Austrian official said his country supported the expansion of parliamentary cooperation with Iran.

Iran will give fitting response to JCPOA breach: MP

The Iranian lawmaker, for his part, lashed out at the US president for making spiteful remarks against the nuclear deal.

“The JCPOA is a collective agreement endorsed by the UN [Security Council] Resolution [2231] and no one can terminate it unilaterally,” Boroujerdi said.

He emphasized that the Islamic Republic would give a “fitting response” to any possible unilateral and unwise measure by the US in violation of the JCPOA.

Since his presidency in January, a year after the deal took effect, Trump has been pushing for renegotiation of the deal or US withdrawal from the agreement.

Earlier on Sunday, Linhart held talks with Iranian Foreign Minister Mohammad Javad Zarif on the JCPOA and the latest developments in the region.