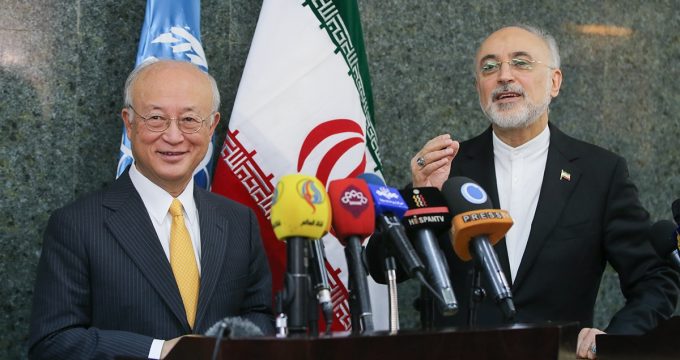 IFP- Head of the Atomic Energy Organization of Iran (AEOI) Ali Akbar Salehi says the Islamic Republic can restore the level of its uranium enrichment to pre-JCPOA era in a very short period of time.

“Iran can produce 20% enriched uranium in four days, but Tehran does not want to see the nuclear deal scrapped,” Salehi said on Sunday after a joint press conference with Director General of the International Atomic Energy Agency (IAEA) Yukiya Amano in Tehran.

Elsewhere in his remarks, Salehi referred to the controversy over the Section T of the Joint Comprehensive Plan of Action (JCPOA), and said “when the Section T was being composed, our expectations were taken into consideration, but unfortunately the other side gives its own alternative interpretations.”

In Section T of the Joint Comprehensive Plan of Action (JCPOA) a set of restrictions on research and other activities that could result in a nuclear explosive device are spelled out.

Salehi told the reporters in Tehran that “we have already talked about the T Section and our positions have been announced explicitly. Section T is not subject to specific inspections,” Tasnim News Agency wrote in a Farsi report.

Salehi also pointed to the nuclear propulsion project, which the AEOI has been tasked by President Hassan Rouhani to pursue.

“The responsibility of the nuclear-propulsion systems is with the AEOI. It is a long-term research project. We have submitted two reports, and are working on it. If the budget is provided, with this pace it will take 10 to 15 years, because the project is very complicated.”

In another part of his statements, the Iranian official noted that Amano did not request to visit Iran’s nuclear sites.

“Mr Amano came to Iran at his own request in light of the importance of the JCPOA and the events that have recently happened in the United States,” he went on to say.

Salehi said Amano is interested to take some actions in this regard.

“We expressed our satisfaction with the IAEA reports and its inspections. So far the agency has reported eight times that Iran has complied with its obligations. We hope the IAEA will continue with this approach,” said Head of the Atomic Energy Organization of Iran.

Salehi told reporters that “we know there is a lot of pressure from the United States on the IAEA, but according to the rules and the oath the Director General has taken, we hope he would express his technical views independently and in an unbiased way.”

Iran Complying with All Obligations: Amano

Amano, for his part, stressed that Tehran has complied with all its obligations.

“All the parties involved in the nuclear deal must comply with their obligations,” said Amano.

Amano also added that “the JCPOA is an agreement between Iran and the P5+1 which is endorsed by the UN Security Council. We have been monitoring so far and we say that Iran has fully complied with all its commitments in the framework of the accord.”