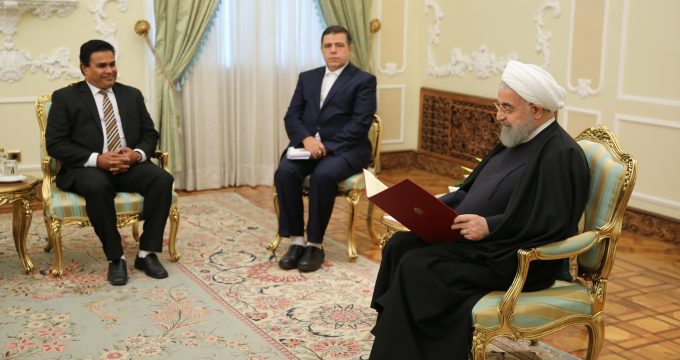 president.ir- President Rouhani described relations between Iran and Sri Lanka as friendly and positive, adding: “The two governments are willing to develop inclusive relations and cooperation, and the Islamic Republic of Iran is ready to develop and strengthen comprehensive commercial, economic, scientific and cultural relations with Sri Lanka”.

President Rouhani received the letter of credence of the new Ambassador of Sri Lanka to Tehran, Sharif Anis on Saturday and emphasised the need for efforts to develop, strengthen and mobilize Tehran-Colombo relations.

During the meeting, the new Ambassador of Sri Lanka to Tehran, Sharif Anis presented his letter of credence to the President of the Islamic Republic of Iran and referred to the longstanding relations between Iran and Sri Lanka in various cultural, political, commercial and economic sectors, and emphasised the need for efforts to develop and mobilize the two countries’ relations and cooperation.

Sri Lanka’s new ambassador also mentioned that the development of friendly relations with Iran was based on Sri Lanka’s foreign policy, calling for an increase in the presence of Iranian investors and businesspeople in Sri Lanka’s investment projects.