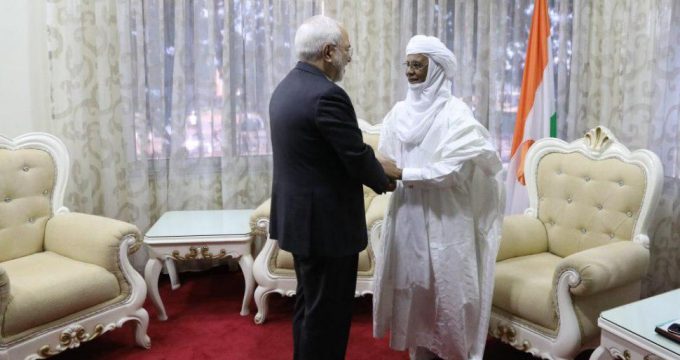 Zarif in Niger, the final stop of his African tour

October 27, The Iranian Project – Iranian Foreign Minister Mohammad Javad Zarif, who left the Ugandan capital, Kampala, arrived in Nigerien capital of Niamey on Thursday evening (Oct 26) at the third and last leg of his tour of Africa.

Zarif finally concluded his five-day tour to Africa on Friday morning and left Niamey for Tehran.

While in Niger, Zarif held meetings with senior Nigerien officials including Prime Minister Brigi Rafini, counterpart Ibrahim Yacouba and President Mahamadou Issoufou on the issues of mutual interests and attended the Iran-Niger Commercial Forum, as well.

During the meeting, Zarif and Rafini discussed bilateral issues, regional and international developments.

They also underlined the need for promoting relations in all fields, particularly in the arena of economy.

In a separate meeting, Iran’s Foreign Minister and the President of Niger emphasized the necessity of boosting political relations and cooperation between Iran and Niger on fighting terrorism and the two sides explored bilateral relations, the ways for enhancing political, economic and trade ties, as well as regional and international issues, including fighting terrorism.

Addressing Iran-Niger Commercial Forum late on Thursday, zarif said, “Mutual cooperation in the field of health has advanced well and the two countries can have cooperation in the technical, engineering and auto-making industry sectors in the future.”

Referring to the presence of Iran’s high-ranking economic and commercial delegation in Niamey, he hoped that the two countries’ private sectors would be able to reach cooperation agreements on banking and transportation by introducing their capabilities and capacities.

Visiting the Republic of Niger was Zarif’s final stop of his African tour, which started Saturday. He has also visited South Africa and Uganda and held talks with senior officials of the two countries and explored ways of expanding of bilateral political and economic relations.

His South Africa stay featured the 13th gathering of the countries’ Joint Commission, as well as meetings with the host nation’s president, Jacob Zuma, and Finance Minister Malusi Gigaba. The event addressed the implementation of standing agreements between the two sides.

The Uganda stop witnessed inauguration of a 50-bed hospital financed by the Islamic Republic.