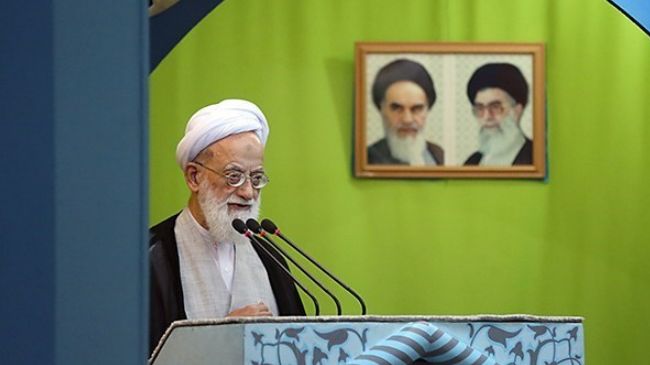 No bargain over defensive issues: cleric

MNA– Ayatollah Emami Kashani who led this week’s edition of Tehran Friday Prayers said that US is fighting with the thoughts, ideology, and feelings of the Iranian nation.

“The devotion of Iraqi nation barred the enemies to equip thugs under the banner of ISIL and with Saudi expenditure to occupy Iraq,” said Ayatollah Emami Kashani, the interim leader of Tehran Friday Prayers, offering congratulations to Iraqi people, government and clerics over the recent victories garnered in fighting terrorist groups.

Condemning some Arab states for financing and supporting ISIL terrorists in Iraq and Syria, the senior cleric quoted former US Secretary of State Kerry telling his Arab counterparts that it had been revealed to the whole world that you were supporting terrorists and Iran is fighting them.

The Ayatollah commented on Trump’s anti-Iran rhetoric and described US president’s speech as based on hatred, prejudice, and jealousy and added that “the war of Americans against Iran, is fighting against thoughts, ideology, and feelings of Iranians founded by late Imam Khomeini.”

“The Iranian thought and culture have endowed might and authority to the country and we will prepare whatever is needed for keeping our might and solidarity,” reiterated the interim leader of prayers. He underlined that “as our Leader has put it, we will never compromise over our defensive issues.”