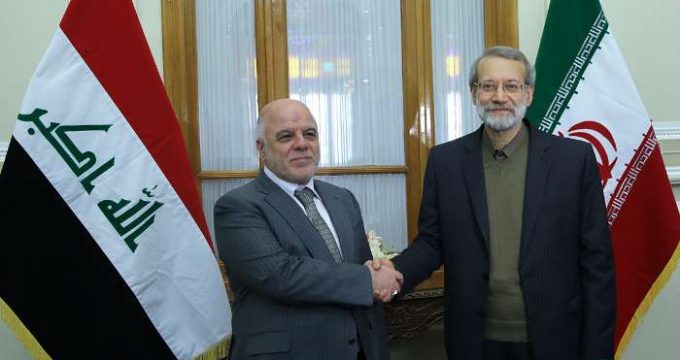 IRNA – Iranian Parliament Speaker Ali Larijani said that the resistance of the Iraqi nation against the terrorists showed that Iraq has a power that no aggressor can overcome that country.

‘The resistance of the Iraqi nation against the terrorists showed to the world that Iraq is so powerful than no country can do anything against it,’ Larijani said in a meeting with Iraqi Prime Minister Haider al-Abadi in Tehran on Thursday.

The Iranian parliament speaker noted that the Iraqi nation made great gains in its war against terrorists and those gains will remain in the history forever.

Larijani, meantime, voiced Iran’s support for the Iraqi nation and government in their ongoing war against terrorist groups.

The Iraqi prime minister, for his part, appreciated Iran for staying beside his country and defending it that country during difficult times.

The Iraqi prime minister went on to discuss the Kurdistan region’s illegal referendum on independence, and said, ‘Fortunately, there was no international support for the separatists, and the only side which backed the referendum was the Zionist regime.”

Al-Abadi arrived in Tehran on Wednesday night and on Thursday morning he was welcomed by Iranian First Vice President Eshaq Jahangiri.