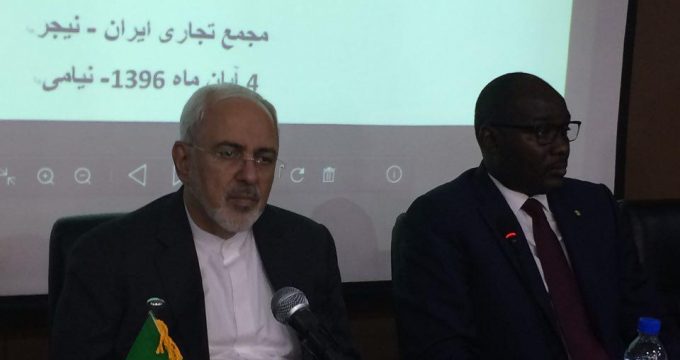 IRNA – Foreign Minister Mohammad Javad Zarif said late on Thursday that there is no limit on Iran-Niger relations and the two countries are determined to promote bilateral ties.

Addressing Iran-Niger Commercial Forum late on Thursday, he said, ‘Mutual cooperation in the field of health has advanced well and the two countries can have cooperation in the technical, engineering and auto-making industry sectors in the future.’

Referring to the presence of Iran’s high-ranking economic and commercial delegation in Niamey, he hoped that the two countries’ private sectors would be able to reach cooperation agreements on banking and transportation by introducing their capabilities and capacities.

Zarif also said that Ian-Niger today’s commercial forum was attended by the best of Iranian scientific and technological sectors who are ready for cooperation with Niger on transfer of technology.

Niger Foreign Minister Ibrahim Yacouba also told the meeting that Niger has had diplomatic ties with Iran since 40 years ago and the presence of Iran’s high-ranking economic delegation in Niger indicates enhanced relations between the two countries.