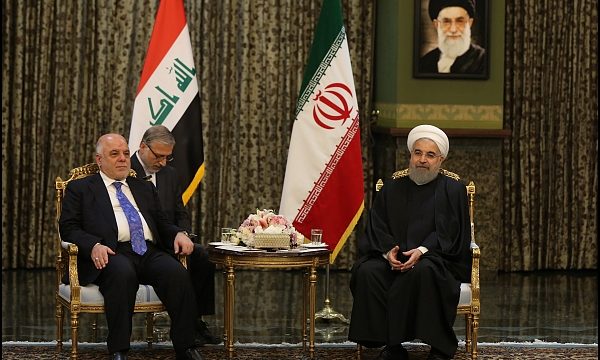 president.ir- The president described unceasing support and devotion of the people, officials and wisdom of the authorities in Iraq in resolving its problems and crises, and stated: “The Islamic Republic of Iran has always supported the Iraqi nation and government in fighting terrorism, strengthening unity and solidarity, and maintaining Iraq’s territorial integrity and will continue to do so”.

“Tehran and Baghdad can establish relations and cooperation in all economic, commercial, investment and science and technology sectors,” said President Rouhani in a meeting with the Prime Minister of Iraq, Haider al-Abadi on Thursday in Tehran.

Dr Rouhani said that the Iraqi nation is gradually moving away from the serious security issues and internal problems and should work towards rebuilding Iraq and developing its regional relations and cooperation, emphasising: “The Islamic Republic of Iran is ready to participate in the process of reconstruction and development of Iraq, along with its government and nation, with all its might”.

Referring to the victories of the Iraqi government and nation against the terrorist groups, especially ISIS, Rouhani said: “Fortunately, the army and the Iraqi people were able to overcome these problems with a lot of solidarity and sacrifices”.

“Development of security and stability in Iraq is a source of happiness for the Iranian government and nation, and the Islamic Republic of Iran regards Iraq’s security its own security and of the region,” said the president emphasising the importance of Iraq’s territorial integrity and independence.
Dr Rouhani also said that the Iraqi government’s prudence on the Kurdistan Region issue, which was accompanied by no tension and paying attention to the national rights of the people of the region was very significant, saying: “The fight against terrorism and separatist attempts, which undermine national and territorial integrity of Iraq, must continue to be pursued, and Tehran wants to strengthen the central government of Iraq”.

The president emphasised the Islamic Republic of Iran’s readiness to develop relations and cooperation with all the countries of the region, adding: “Development of bilateral and multilateral relations will surely benefit the people of the region”.

Iran and Iraq’s close consultations and relations are crucial in developing and strengthening regional relations, said Rouhani adding: “Iran has not only not sought regional domination, but it has also been a major advocate of security and in the front line of the fight against terrorism. Today, we do not see any reason for continuation of disagreements and tensions between the countries of the region”.

The president described urgent resolution of regional crises, especially in Yemen, and expressed hope that Iraq and other countries in the region would see growing development of the region.

Appreciating the services and hospitality of the Iraqi government and people from the pilgrims of Imam Hussein (AS) during the ceremony of Arba’een, he said: “We hope that this year, with the measures taken, the ceremony of Arba’een and services will be offered in the best way possible”.
During the meeting, Prime Minister of Iraq, Haider al-Abadi said: “The Iraqi people must stand united and together against conspiracies designed against the country”.

“The disagreements and conflicts in the region provide conditions for the interference of others in the internal affairs of the countries of the region, so, they must work towards the resolution of disputes and the development of cooperation,” said the Prime Minister of Iraq.

Iraqi government and nation consider serving Imam Hussein’s (AS) pilgrims as their duty, he said, expressing hope that this year, with the efforts of the people and officials of the two countries, we will witness holding of a magnificent Arba’een ceremony in this country.