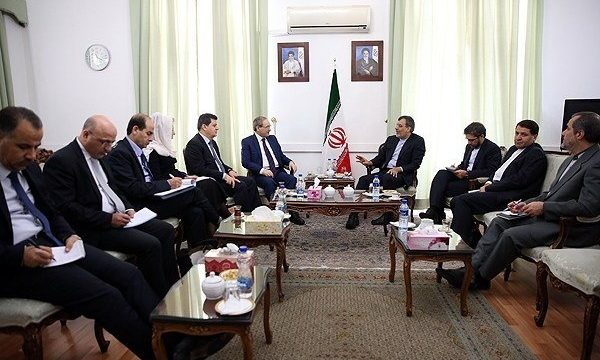 Tasnim – Diplomats from Iran and Syria met in Tehran to discuss the agenda of the seventh round of Syria peace negotiations in the Kazakh city of Astana and the latest developments in Syria.

They also discussed the agenda of the forthcoming Astana peace talks, the humanitarian situation in war-hit Syria and plans to deliver humanitarian aid to the Syrian people.

Syria’s warring sides have so far attended six rounds of peace talks in Astana, brokered by Iran, Russia and Turkey, known as the guarantors of a ceasefire in the Arab country.

The fourth round of those talks in May produced a memorandum of understanding on de-escalation zones in Syria, sharply reducing fighting in the country.

During the sixth round of Astana talks in September, Iran, Russia and Turkey agreed on a deal to establish and patrol a de-escalation zone in Syria’s northern Idlib province. In early October, Turkey deployed tanks and military vehicles on its Syrian border, building up military presence in Idlib.

The next meeting on the Syrian crisis settlement in Astana will take place on October 30-31.