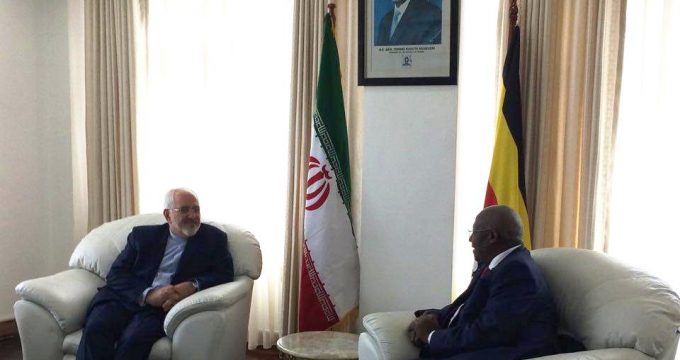 Zarif in Uganda to review issue of mutual cooperation

October 25, The Iran Project – Iranian Foreign Minister Mohammad Javad Zarif at the second leg of his tour of Africa arrived in the Ugandan capital, Kampala, on Tuesday (Oct 24) .

The Iranian foreign minister wrapped up his visit to South Africa on Tuesday afternoon and later left Pretoria for Kampala.

Zarif was welcomed by the local officials and the Iranian envoy at Kampala’s international airport upon arrival.

While in Kampala, attended a meeting held with the Iranians residing there, Iran-Uganda business forum and met with Ugandan counterpart Sam Kutesa.

“Iranian nationals, wherever they live, have been successful in defending their compatriots and national interests,” Zarif noted.

“The Iranian nationals residing in other world countries act as a bridge to make a link between the cultures and civilizations,” Zarif reiterated in the meeting held upon his arrival in the Ugandan capital.

He hoped that the Iranian representative offices in different world countries would provide proper services for the Iranian nationals in order to prepare the ground for more active presence of the Iranian entrepreneurs in the global markets.

During their meeting with Kutesa, the two sides  emphasized enhancement of political, economic and commercial relations between the two nations.

Addressing the Iran-Uganda business forum, kicked off this morning in Kampala, Zarif said Uganda is Iran’s close friend and it has supported Iran in many occasions, adding that today Iran and Uganda has a good opportunity to develop their relations.

Referring to the big delegation accompanying him in his visit to the African nation, Zarif said that Iranian companies today are very eager to engage with Uganda.

Iran’s top diplomat went on to say that the Iranian banking officials during their stay in Uganda will explore ways to remove obstacles to the banking cooperation between Tehran and Kampala.

Since the 1979 Islamic Revolution in Iran, the country has attached great importance to Africa, said Zarif stressing that expansion of economic ties with Africa is among Iran’s priorities.

This is the second time that the Iranian foreign minister is visiting Uganda.