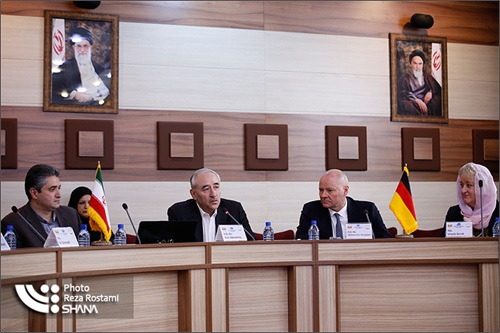 SHANA – The two-day Iran-Germany Energy opened in Tehran on Tuesday in the presence of Amir Hossein Zamaninia, deputy petroleum minister for international affairs and trading, and German Ambassador to Tehran Michael Klor-Berchtold.

During the committee, Mr. Zamaninia highlighted major energy areas that need to be developed in Iran, calling for removing bottlenecks of banking relations between Iran and Germany.

He also expressed optimism that mutual trade between Iran and Germany increase once new contracts are signed between them.

The official underlined the great energy riches of Iran, saying the country can play a key role in materialization of low-carbon economy agenda.

A low-carbon economy (LCE), low-fossil-fuel economy (LFFE), or decarbonised economy is an economy based on low carbon power sources that therefore has a minimal output of greenhouse gas (GHG) emissions into the biosphere, but specifically refers to the greenhouse gas carbon dioxide.

Also in the meeting, Ms. Ursula Borak, the deputy director general for Germany’s Economy and Energy Minister, said riche oil and gas reserves as well as skilled labor have made Iran an attractive destination for foreign investors.

She said energy use optimization and renewables are two main areas that would be discussed during the committee, expressing hope that cooperation between the two countries will be bolstered by assessing various cooperation grounds between them during the event.