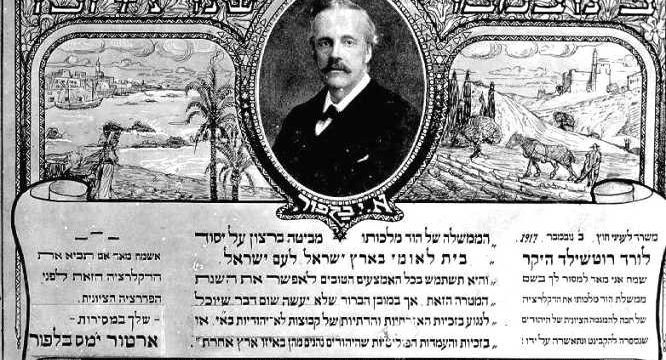 Balfour merrymaking a potential PR disaster for the British government

American Herald Tribune | STUART LITTLEWOOD: The extraordinary programme of centenary celebrations in the UK to honour Lord Balfour and his lunatic Declaration — and the British Government’s continuing part in it — is an affront to citizens here and to countless millions abroad. And many a sharp pin is waiting to burst the pretty Balfour balloon being desperately inflated by Israel-firsters at Westminster.

Balfour’s 1917 pledge and its consequences, played out over the last 70 years, ride roughshod over Christian values and humanitarian law. Rothschild replied to Balfour’s letter saying that “the British Government has opened up, by their message, a prospect of safety and comfort to large masses of people who are in need of it.” Well, it also opened up the prospect — and the reality — of a lifetime of abject misery for millions of Palestinians who had no need of it and certainly didn’t deserve it. It also helped to plant in the most sacred part of the Middle East an evil regime that shows contempt for human rights and international law and is bent on creating instability all around and confiscating every acre of land and every natural resource to aid its expansion.

The daft thing is, Balfour didn’t even write the Declaration. He was simply the upper-class twit who signed it and did so without even bothering to consult the people whose homeland he intended giving away. The carefully worded letter to Rothschild (the so-called Declaration) was the work of Leopold Amery, political secretary to the War Cabinet at the time, who cleverly kept hidden his Jewish ancestry throughout his quite impressive career. He was also largely responsible for forming the Jewish Legion battalions which were the forerunners of the hated Israeli Defence Force, which Israeli Miko Peled describes as “one of the best trained and best equipped and best fed terrorist organisations in the world”.

Amery was an eager Zionist and had a supervisory role in the British mandate government in Palestine during the 1920s, actively preparing it for eventual Jewish takeover. He operated within a government the upper echelons of which were stuffed with Zionist sympathisers such as Churchill and Lloyd George.

In response to the avalanche of pro-Balfour celebratory tosh the Palestine Mission to the UK commissioned a ‘Make It Right’ campaign featuring contrasting images of Palestinian life before and after 1948, when Israel declared statehood on land it had overrun and ethnically cleansed. The campaign message of course objects to the Balfour declaration which promised a Jewish homeland in Palestine. Posters were supposed to appear on buses and in Underground rail stations but London’s transport authority, Transport for London (TfL), has banned the advertisements on the grounds that they “did not comply fully with our guidelines”. It seems TfL don’t like “images or messages which relate to matters of public controversy or sensitivity” or causes that are “party political”.

Palestinian ambassador Manuel Hassassian accuses TfL of consorship saying: “Palestinian history is a censored history. There has been a 100-year-long cover-up of the British government’s broken promise, in the Balfour declaration, to safeguard the rights of the Palestinians when it gave away their country to another people. TfL’s decision is not surprising as it is, at best, susceptible to or, at worst, complicit with, all the institutional forces and active lobby groups which continuously work to silence the Palestinian narrative. There may be free speech in Britain on every issue under the sun but not on Palestine.”

Prime Minister Theresa May has invited her Israeli conterpart ‘Bibi’ Netanyahu to the London celebrations. It is unthinkable in Government circles for an honoured guest to be confronted with a London plastered with such inconvenient messages. Nevertheless, they’ll appear on 52 London black cabs, which aren’t under TfL’s control, so our PM’s loathsome visitor may not entirely escape embarrassment, assuming he’s capable of feeling it.

Conflating justice and tolerance with anti-Semitism

Speaking of declarations I’m reminded of a far more sensible one by Shimon Tzabar, who had been a member of Jewish terrorist organisations in Palestine during the British Mandate including the Stern Gang, Irgun and Haganah. After 1948 and the establishment of the Israeli state he fought in its 1948-50, 1956, and 1967 wars but spoke out against the annexation of the Golan Heights and East Jerusalem and the occupation of the West Bank and Gaza Strip. He even began calling himself a “Hebrew-speaking Palestinian”. Tzabar and others eventually felt moved to publish the following declaration:

“Occupation entails foreign rule. Foreign rule entails resistance. Resistance entails repression. Repression entails terror and counter-terror. The victims of terror are mostly innocent people. Holding on to the occupied territories will turn us into a nation of murderers and murder victims. Let us get out of the occupied territories immediately.”

Wouldn’t Mrs May prefer to celebrate Tzabar’s Declaration? He moved to England where he famously published the MUCH BETTER THAN THE OFFICIAL MICHELIN Guide to Israeli prisons, Jails, Concentration Camps and Torture Chambers. The best and safest way to begin a tour of these horrible establishments, it said, was to look like a Palestinian Arab and get yourself arrested .”Once you look like a Palestinian you have a good chance of being arrested. Your chance is actually so good, that you don’t have to do anything in particular.”

That other Israeli straight-talker Miko Peled, mentioned above, put the cat among the pigeons at the Labour Party conference last month when he told activists that Israel is “terrified” of Jeremy Corbyn becoming British prime minister and will do everything they can to stop him. “They are going to pull all the stops, they are going to smear, they are going to try anything they can to stop Corbyn from being prime minister. It’s up to Labour, it’s up to you [to ensure] that they don’t have the ability to do that…. Jeremy Corbyn is an opportunity for Britain that, if it gets lost, won’t come back for a very long time.

“The reason anti-Semitism is used is because they [the Israelis] have no argument, there is nothing to say,” said Peled. “How can a call for justice and tolerance be conflated with anti-Semitism? I don’t know if they realise this but they are pitting Judaism against everything good and just.”

Peled is an Israeli Jew, the son of an Israeli general, and a former soldier in the Israeli army. You couldn’t find a more authentic insider source. Here’s a flavour of his message:

“The name of the game: erasing Palestine, getting rid of the people and de-Arabizing the country…

“By 1993 the Israelis had achieved their mission to make the conquest of the West Bank irreversible. By 1993 the Israeli government knew for certain that a Palestinian state could not be established in the West Bank – the settlements were there, $ billions were invested, the entire Jordan River valley was settled… there was no place any more for a Palestinian state to be established. That is when Israel said, OK, we’ll begin negotiations…”

“When people talk about the possibility of Israel somehow giving up the West Bank for a Palestinian state, if it wasn’t so sad it would be funny. It shows a complete misunderstanding of the objective of Zionism and the Zionist state.”

Meanwhile Netanyahu has just announced a temporary easing of the fishing limits imposed on Gaza’s fishermen. For two months, in the southern half of Gaza, they will be able to sail out 9 miles after which the limit reverts back to 6. Sounds generous? No, it’s ridiculously cruel. And restrictions remain even tighter in the northern half. Under the Oslo Agreements (1993) Israel is supposed to allow the Palestinians to fish up to 12 miles out, in line with the UN Convention on the Law of the Sea but, as with so many other agreements, the Zionist regime has never honoured its obligation. Furthermore Israel’s 10-year blockade on Gaza has made it impossible for many fishermen to buy parts to maintain their vessels, so the once flourishing fishing industry has been crippled.

And Netanyahu recently locked up the Palestinians for 11 days while Israelis enjoyed festive holidays. Marilyn Garson, writing in the Israeli newspaper Haaretz, reported: “Netanyahu seals the gates of the West Bank and Gaza for eleven days, to enjoy Sukkot. How flagrant, to confine millions of people in the name of a holiday that celebrates the flimsy, temporary nature of our walls. If Jews were herded behind concrete walls and locked away for eleven days, so that someone else might enjoy a Jew-free holiday, would we shrug that off?” Haaretz is a relatively honest source and to print such a thing in Israel is quite daring.

On the same subject the Jewish Chronicle had this to say: “Border closures over the High Holidays and other Jewish festivals are routine, but are usually much shorter. The original decision stoked complaints within the Israeli security establishment that it was principally “grandstanding” by ministers eager to burnish their right-wing credentials.” The JC went on the explain that the 11-day closure had been demanded by Israeli police and the Internal Security minister, and was initially opposed by the Israeli military and senior Defence Ministry officials who said that it would be an unnecessary punishment to tens of thousands of law-abiding Palestinian workers.

However, both Israeli papers omitted to say that, thanks to Balfour’s legacy, there has been no freedom of movement for Palestinians since the closure of Gaza and the West Bank by Israel 26 years ago. Closure is the normal state of affairs and not to be confused with foolish ideas that crossings are usually open.

The Balfour Project, which promotes justice, security and peace for both Jews and Arabs, has made available a wealth of information. One of its publications sums up the problem very neatly:

“The Declaration pledges Britain’s support for a ‘national home’ in Palestine for the Jewish people on the understanding that the rights of ‘existing non-Jewish communities in Palestine’ would not tbe prejudiced. The failure to uphold this second clause, for which Britain bears much responsibility, has caused conflict between Palestinians and Israelis ever since.

“This was just one of Britain’s contradictory promises during the First World War. After the war we secured a mandate from the League of Nations which included a ‘sacred trust’ tro prepare the people of Palestine for independence. But in the end Britain walked away.”

Yes, in 1948 we abandoned the mess we had created. As the last British soldiers marched away Jewish leaders declared statehood without borders, pushing far beyond the boundaries set out in the UN Partition Plan the year before, their terror militia putting to flight hundreds of thousands of Palestinians, massacring many more and stealing their homes and farms.

What Britain caused to happen in the Holy Land was contrary to all decency and justice. History will not judge kindly the British Government’s decision to celebrating Balfour “with pride” while refusing to apologise and make amends. There’s a fair chance the whole sorry spectacle will backfire onTheresa May and teach her unpleasant associates a sharp lesson.

A colleague wrote only yesterday to one of our government ministers and what she said is worth repeating here: “Ministers, from the Prime Minister down, should reflect with humility that but for that disastrous decision by their predecessors 100 years ago, the Holy Land might still be a land of peace where all the faiths lived in harmony together.”