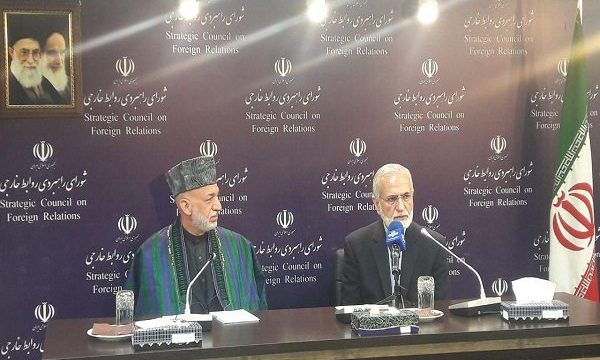 “The legacy of Mr. Karzai in Afghanistan is longlasting, and even today he is an influencial figure of Afghanistan’s public sphere,” said Seyyed Kamal Kharrazi, the Head of Iran’s Strategic Council on Foreign Relations on Tuesday.

The former Iranian foreign minister made the remarks in his meeting with former Afghan President Hamid Karzai in Tehran.

“We hope to take advantage of Mr. Karzai’s visit to Iran and the meetings scheduled to benefit from his ideas and exchange views on the future of Afghanistan,” said the Iranian diplomat.

“Today, one of the big issues of Afghanistan is terrorism,” reiterated Mr. Kharrazi, “I mean in addition to Taliban, ISIL is one of the threats growing in Afghanistan and it can affect Iran in near future.”

“Terrorism on one side, and the occupation of Afghanistan by foreign forces are the two major problems of Afghanistan today,” asserted the Iranian former FM. “The American forces attack on Afghan lives and properties and these are the signs of occupation,” highlighted Mr. Kharrazi.

“While such violence occurs against the people of Afghanistan, the people of this country will never defend the Americans,” he said. “To keep influence in the Central Asia and impact Russia, China, and Iran, the US is determined to continue its strategic presence in Afghanistan,” opined the Iranian official.

“The Afghan nation should rely on their own forces, come together and take control of the future of their country themselves,” said Mr. Kharrazi.

“We never forget that the three countries of Pakistan, Saudi Arabia, and UAE recognized Taliban,” added the Iranian diplomat. “Now all Taliban forces and Afghans should share the table of talks to help each other and save their country,” Mr. Kharrazi called upon Afghans to get united for their dcountry.