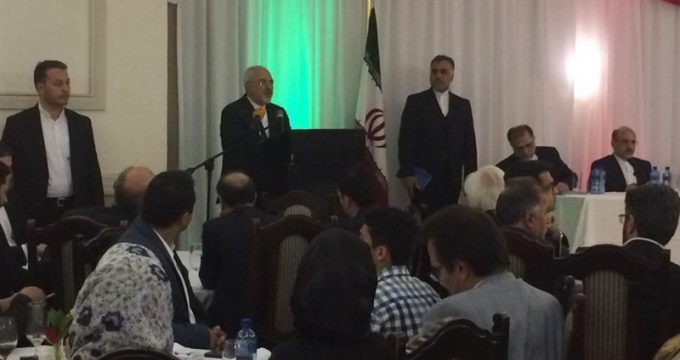 Iranian minister of foreign affairs said no mudslinging from people like Trump can spoil Iran’s honor and defense, as long as Iranians back their country, Islamic establishment and Revolution.

Lawmakers in the upper house of Russia’s parliament are set to call in a statement on their colleagues in US Congress and other Western legislatures to do all in their power to help protect the multilateral Iran deal, which they say is under threat by the US president.

Foreign Ministry on Monday submitted the 7th full report on the Joint Comprehensive Plan of Action (JCPOA) to the Iranian parliament.

Iranian President Hassan Rouhani has stressed that all of US President Donald Trump’s efforts to undermine the nuclear deal have so far failed.

Iran’s foreign minister, who is on visit to Republic of South Africa (RSA), met and talked with the African country’s President, Jacob Zuma, on Monday evening.

Iranian Deputy Ambassador to the United Nations Es’haq Al-e Habib says the country’s missile program is not open to negotiation and will continue with strength and according to the Islamic Republic’s national defense agenda.

Over 100 major projects planned in Tehran for foreign investors: Mayor

Deputy Permanent Representative of Iran to the UN Eshaq Al Habib blasted the Iranophobia scenario pursued by the West against the country’s nuclear program, and said that the Israeli regime is causing the worst type of threat to the international security and stability.

Iranian Foreign Minister Mohammad Javad Zarif has left the South African capital of Pretoria for Uganda’s capital of Kampala at the head of a high-ranking political and business delegation.

Eshaq Al-e-Habib, Hassan Rouhani, Mohammad Javad Zarif October 24, 2017
Iran’s defense might has nothing to do with JCPOA: Envoy
Women’s hair in Kashmir being chopped off during sleep