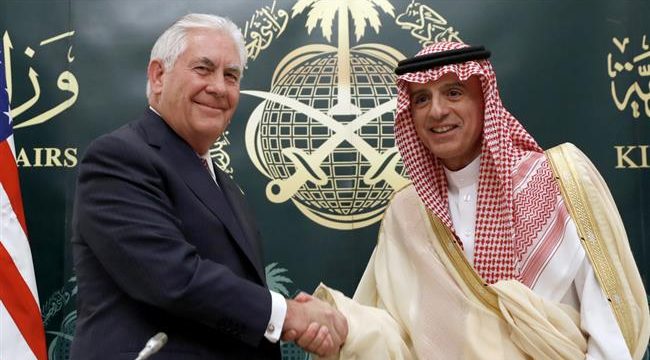 Press TV – US Secretary of State Rex Tillerson has called on European countries to support Washington’s new sanctions against Iran’s Islamic Revolution Guards Corps (IRGC), warning them that there is “great risk” in doing business with Tehran.

Speaking at a press conference with Saudi Arabia’s Foreign Minister Adel al-Jubeir in Riyadh on Sunday, Tillerson claimed that the IRGC was causing “instability” in the region.

“We are hoping that European companies, countries and others around the world will join the US as we put in place a sanctions structure to prohibit certain activities of the Iranian Revolutionary Guard that foment instability in the region and create destruction in the region,” Tillerson said.

The top US diplomat’s remarks fell in line with President Donald Trump’s new strategy against Iran, which he unveiled earlier this month by refusing to certify the 2015 Iran nuclear deal while threatening sanctions against the IRGC.

Tillerson said King Salman “gave a very strong endorsement of that policy to counter Iran’s malign behaviors in the region.”

Shortly after Trump’s announcement, the US Treasury Department added the IRGC to its anti-terrorism sanctions list, claiming in a statement that the elite military force was “providing support to a number of terrorist groups, including Hezbollah and Hamas, as well as to the Taliban.”

The US Treasury also slapped sanctions on four entities — three based in Iran and one based in China — over claims of providing “support to the IRGC or Iran’s military.”

IRGC advisers are currently assisting the Iraqi and Syrian forces in their anti-terrorism campaign against Daesh (ISIL) and other terrorist groups wreaking havoc in both countries.

Elsewhere, Tillerson said Iran and all other countries currently helping Iraq in its fight against terrorist groups need to leave the Arab country now that the battle is drawing to a close.

“Any foreign fighters in Iraq need to go home and allow the Iraqi people to regain control,” he said.

The former oil executive did not clarify whether by “all” he also meant the thousands of US forces who have been deployed to Iraq to supposedly “assist” Iraqi forces in their battle.