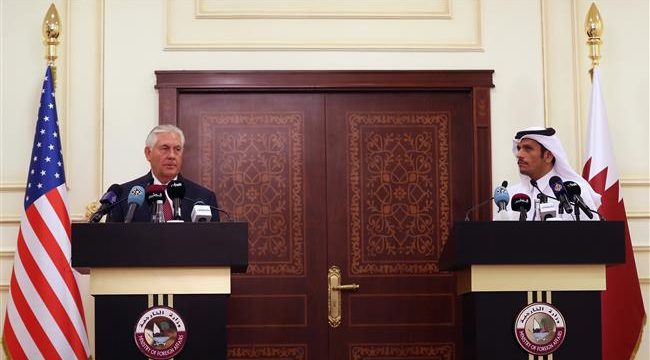 In Qatar, Tillerson says Saudi Arabia not ready to talk

Press TV – US Secretary of State Rex Tillerson says he has embarked on a diplomatic shuttle to help mend fences between neighboring Persian Gulf states Saudi Arabia and Qatar, but that Riyadh has been unresponsive to his mediation bid.

Tillerson has traveled to Qatar following a visit to Saudi Arabia, telling Qatari officials that Saudi Arabia is not ready to talk to Doha to end a months-long diplomatic dispute between the Arab states.

In a joint press conference with Qatari Foreign Minister Sheikh Mohammed bin Abdulrahman Al Thani in Doha on Sunday, Tillerson said that during his stop in Saudi Arabia, he had seen no signal that Riyadh was willing to resolve differences with Doha through negotiations.

“In my meetings with [Saudi] Crown Prince Mohammed bin Salman, I asked him to please engage in dialog, [but] there is not a strong indication that parties are ready to talk yet,” Tillerson said.

Saudi Arabia has been leading three other Arab states in a diplomatic and economic war on Qatar since June, accusing Doha of supporting “terrorism.” Qatar rejects the allegation, blames the Saudi-led countries for the crisis, and says they harbor ulterior motives for the showdown.

The US official has sought to mediate between the feuding parties, and his trip to Saudi Arabia and then to Qatar has been seen as an attempt at shuttle diplomacy. But according to Tillerson himself, he may not have been successful.

“We cannot force talks upon people who are not ready to talk,” he said in the presser with Sheikh Mohammed.

Since the eruption of the dispute, Qatar has said it is open to dialog even as it has condemned the pressure being exerted on it by the Saudi-led countries, which also include the United Arab Emirates (UAE), Egypt, and Bahrain.

“These countries have resorted to undiplomatic [measures] that have nothing to do with modern diplomatic lessons, and this is no good,” the Qatari foreign minister said in the Sunday press briefing.

The GCC is a regional grouping of six countries, namely Qatar, Bahrain, the UAE, Saudi Arabia, Kuwait, and Oman. Four of those countries are involved in the dispute with Qatar, and given Saudi Arabia’s influence in the GCC, there have been indications that the body may eject Doha.

The Qatari foreign minister said at the presser, “The GCC is quite important for the collective security and we feel sorry that the GCC will be the victim of the crisis against the state of Qatar.”