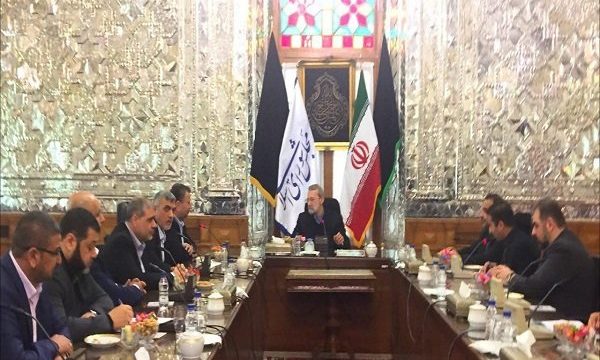 Larijani calls Palestinians to be united against ‘Israel regime’

“From the very first day, the Zionist regime was after eliminating Palestinian resistance groups but the thing important is that Palestinian parties put disagreements aside and get united against the regime of Israel,” said Ali Larijani, the Speaker of Iranian parliament.

The top Iranian legislator made the remarks on Saturday, while receiving Hamas’s Deputy Political Chief, Saleh el-Arouri, in Tehran.

“Your enemies are concerting their efforts to eliminate you or show you as an ineffective body before the eye of the public, but you do not have to permit them to manage to divide you,” opined the Iranian top lawmaker.

The Palstinian resistance figure, for his part articulated that so far as the occupation continues in Palestine the Palestinians won’t lay their arms down.

“Undoubtedly, the Palestinian resistance forces will never give up on their arms,” highlighted Saleh el-Arouri. We are doing our best to establish the power equilibrium in Palestine and this is not an easy job but we won’t quit till the full accomplishment of the job,” reassured the Palestinian official.