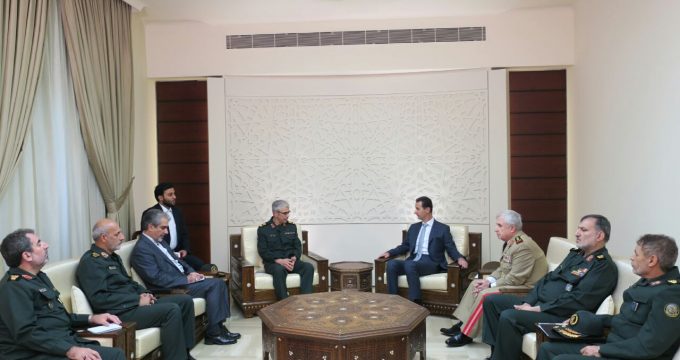 The Iranian general was welcomed by the Syrian army high-ranking officials upon arrival at Damascus international airport.

In a meeting with President Assad, the Iranian top military official expressed hope that terrorism will be soon uprooted from the entire Syria and also congratulated the Syrian Army and armed forces on their recent victory over the terrorists of Daesh.

For his part, the Syrian president appreciated the all-out support extended to his respective country by Iran’s Supreme Leader of the Islamic Revolution and the people and government of the country to counter terrorism in Syria.

Talking to Jassem al-Freij, Baqeri said Daesh, the Nosra Front and other terrorist groups were “created through US and its allies’ meticulous planning”.

Meanwhile, the Syrian Minister of Defense said that Damascus is proud of cooperating with Tehran, adding that the US-Zionist plot to topple the Syrian government was neutralized by Syrian President leadership as well as the resistance of the Syrian Army, unity of Syrian people, and support of Iran, Russia and the Islamic Resistance.

He also hailed exemplary coordination between armed forces and people.

Baqeri signed the deal on Friday at the end of his visit to the Syrian capital to help promote cooperation between the two countries’ armed forces.

He told reporters after signing the MoU that the agreement emphasizes development of military cooperation in various dimensions such as education operation, logistics and intelligence