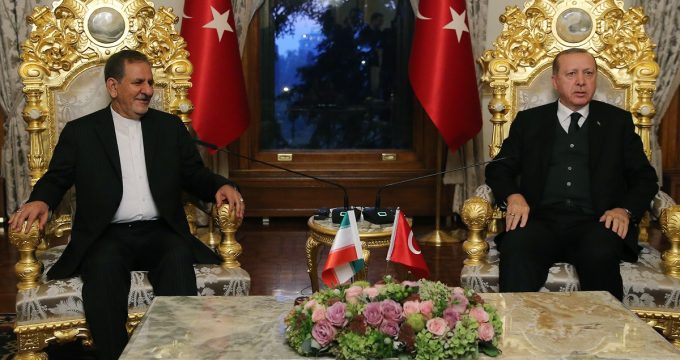 While in Turkey, Jahangiri attended a joint presser with Yıldırım and inked two MoUs, participated in 9th Summit of the D-8 Organization for Economic Cooperation, addressed that gathering and  held separate meetings with Azerbaijani President Ilham Aliyev, Yıldırım as well as Turkish President  Recep Tayyip Erdogan.

At a press conference with Turkish Prim Minister on Oct. 19,  Jahangiri reiterated that Turkey and Iran support Iraq’s territorial integrity.

The two Memoranda of Understanding entail bilateral cooperation in the areas of science and technology between Iran’s Ministry of Science, Research and Technology and Turkey’s Scientific and Technological Research Council as well as environmental cooperation between the two countries.

Besides in a meeting with Aliyev in Istanbul, Turkey, on Thursday evening, Jahangiri called for expansion of Tehran-Baku cooperation in tackling the extremist and terrorist groups in the sensitive region of Middle East.

The Azeri president also said Baku-Tehran-Ankara cooperation is vital for establishing security and bolstering economic development in the region.

Addressing the 9th Summit of the Developing-8 Countries (D-8) meeting in Istanbul on Oct. 20, Jahangiri said that the adoption of interventionist policies on the one hand and the growth of extremism and regional violence on the other hand has contributed to the emergence of the current challenges, crises and threats facing the world.

The ninth summit marks the 20th anniversary of the economic group consisting of eight emerging economies from the Muslim world.

For his part, the Turkish president said that his country is strongly determined to reach the 30-billion-dollar trade exchange between the two countries.

In the area of oil, Erdogan noted that his country is willing to buy more oil from Iran, as well.