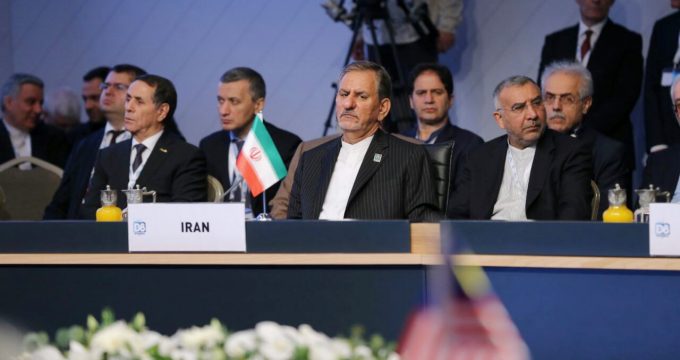 Press TV – Iran has warned that the policies pursued by the administration of US President Donald Trump could deteriorate the current conflicts in the Middle East.

Iran’s First Vice President Esh’aq Jahangiri told a summit of the Developing-8 (D-8) countries in Istanbul that the world specifically needed to be aware about the consequences of what he described as “the expansionist and extremist aspirations” of America as well as Israel on the stability of the region.

Jahangiri said the unilateralism and racism as expressed in viewpoints of certain leaders were things of the past. This is while the world is already living in the age of democracy, multiculturalism, tolerance and co-existence, he emphasized.

The Iranian official said his country strongly supported dialog as the best solution to numerous problems that the world was grappling with, adding that interactions among all nations to resolve tensions based on common interests as well as the principle of mutual win needed to be promoted.

“We should never let militaristic and violent policies replace dialog-based solutions,” added the Iranian official, warning that such policies could put people living in Muslim countries at the risk of “death and destruction”.

“We need to struggle to replace dominant multilateralism with unilateralism, bullying-oriented approaches with dialog-oriented mechanisms and also political interventions with regional and international cooperation,” Jahangiri said in his speech at the D-8 summit.

Iran’s first vice president further emphasized that followers of all faiths need to stand against any form of terrorism and violence, stressing that a fight against the mentalities that nurture terror groups like Daesh needed such a unity.

The world, he said, needed to stand together to prevent those policies from spreading violence, radicalism, war and discord in the Muslim world.

“Discord, violence and terrorism anywhere and through any name is dangerous and is even more dangerous if it is presented in the name of religion, ethnicity and nationality. We are honored to have been presented with a religion, a culture and a civilization that promotes mercifulness, affection, ethics, justice and freedom.”