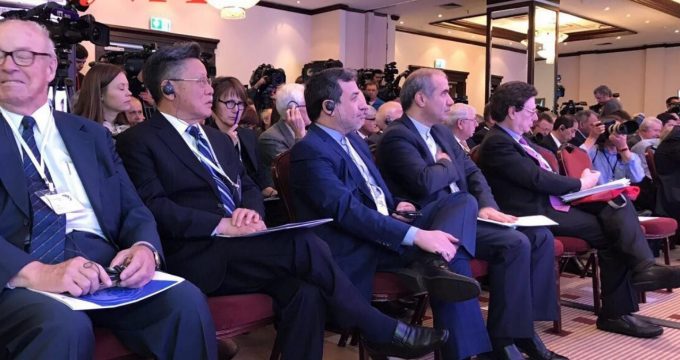 Araqchi is heading the Iranian delegation during the two-day meeting.

The Conference is bringing together several delegations from 40 countries and international organizations to discuss and brainstorm the most pressing issues related to the international nuclear nonproliferation regime.

The current state of the Nuclear Non-Proliferation Treaty (NPT) and prospects for the 2020 NPT Review Cycle will be one of the main topics on the Conference agenda.

Other key topics will include the sustainability of the landmark Iran nuclear deal officially known as the Joint Comprehensive Plan of Action (JCPOA) and the role of multilateral diplomacy in defusing the nuclear crisis on the Korean peninsula.

Araqchi arrived in the Russian capital Thursday morning (Oct 19) to partake in the 2017 Moscow Nonproliferation Conference and hold talks with his Russian counterpart Sergei Ryabkov on various issues, particularly the latest anti-Iran strategy taken by the US President Donald Trump on October 13.

In a meeting with Araqchi, Russian deputy foreign minister described the approach adopted by the US administration against the Iran Nuclear Deal as a sign of Washington’s irresponsibility.

Moscow and Tehran, as he underlined, cannot be indifferent to the US irresponsible behavior which has direct effect on procedures.

For his part, Iran’s Araqchi talked of Washington’s measures against JCPOA, saying that Washington’s irresponsible behavior has put the international deal in a new condition.