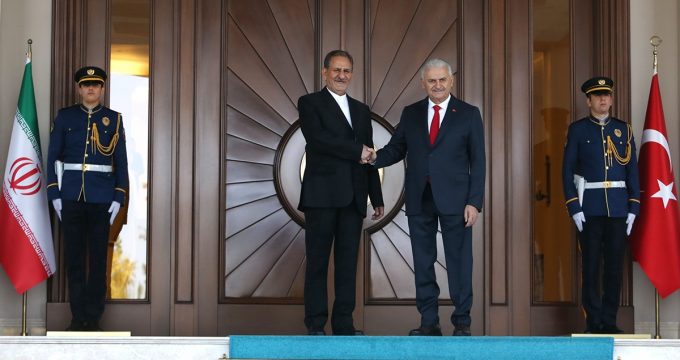 “We are glad about the increasing cooperation on this issue,” Yıldırım said at a press conference with Iranian First Vice President Eshaq Jahangiri, reported Hurriyet Daily.

The two countries pledged to take “necessary steps” against the independence referendum of northern Iraq, and agreed to stand against “every kind of step that would violate the territorial integrity and sovereignty of Iraq,” Yıldırım said.

The move by the KRG was a result of “personal ambitions and future quests of the administrators in the region,” instead of seeking a better future for different groups in northern Iraq, he noted.

“Under these circumstances it is difficult for those who cause this adventure to exist in the region and to continue their lives as leaders. They should take the necessary steps to ensure that more people in the region are not harmed,” the Turkish prime minister said.

Speaking about the Astana process – led by Turkey, Iran and Russia to find a solution on ground between rebel armed groups and the Syrian government – Yıldırım said the talks would lay foundation for discussions in Geneva, where talks on the war-torn country’s political future are held under the auspices of the UN.

He said Turkey and Iran will work jointly to eliminate the attempts of “establishing an artificial state” on their borders.

Jahangiri, for his part, reiterated that Turkey and Iran support Iraq’s territorial integrity and said the Iraqi government has regained lands that the Iraqi Kurds have taken control over during the war against the ISIL.

The referendum held by the KRG was “void “and “unsuccessful,” Jahangiri reiterated.

Speaking about bilateral relations, Jahangiri recalled an agreement between the two countries on the use of local currencies in trade.

“We can increase the export of crude oil,” he said.

Jahangiri is scheduled to attend the Developing-8 Countries (D-8) meeting in Istanbul on Oct. 20. The ninth summit marks the 20th anniversary of the economic group consisting of eight emerging economies from the Muslim world.

The organization was established on June 15, 1997, by Turkey, Indonesia, Bangladesh, Egypt, Iran, Malaysia, Nigeria and Pakistan. Today, the organization has a combined GDP of $3.7 trillion and includes more than one billion people – around 15 percent of the world’s population.