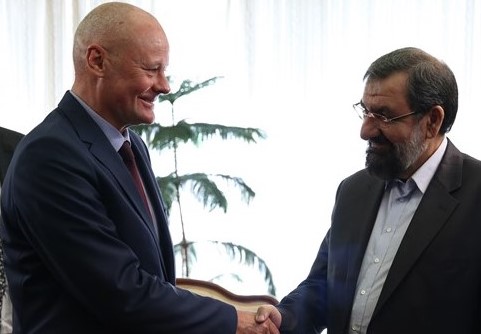 Trump’s stance against JCPOA mockery of other parties: Iranian official

Tasnim – Secretary of Iran’s Expediency Council Mohsen Rezaei slammed US President Donald Trump’s comments against the 2015 nuclear deal, known as the Joint Comprehensive Plan of Action (JCPOA), saying his stance is a mockery of the other countries that negotiated with Iran.

Speaking at a meeting with German Ambassador to Tehran Michael Klor-Berchtold on Sunday, Rezaei denounced Trump’s Friday speech against the Islamic Republic and its nuclear deal with the Group 5+1 (Russia, China, US, Britain, France, and Germany).

“It is an ugly behavior to renege on an international agreement, and it is a kind of insulting and ridiculing other countries, especially the five countries that negotiated with Iran,” he said adding, “Mr. Trump, making such comments (against Iran and the JCPOA), is not going to have a good fate.”

Klor-Berchtold, for his part, said there are some people who have mounted an anti-Iran propaganda campaign and change the mentality of the American statesmen.

During the meeting, the two sides also exchanged views on ways to deepen relations between Tehran and Berlin in diverse fields.

Speaking from the White House on Friday, Trump said he will choose not to certify that Tehran is complying with the JCPOA.

He also said that the new policy is aimed at preventing what he claimed to be Iran’s effort to obtain a nuclear weapon.

In response, Iran’s President Hassan Rouhani on Friday blasted the anti-Iran comments made by the US president, reiterating that the Iranian nation will not surrender to such “false statements and hate speech”.