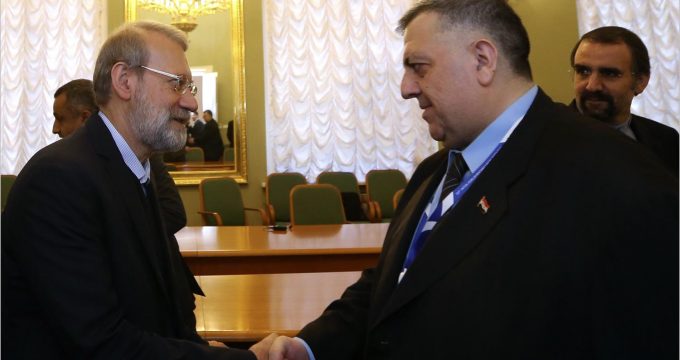 Tasnim– Iranian Parliament Speaker Ali Larijani expressed optimism about the outcome of the protracted war in Syria, saying the Arab country’s people will pass through the crisis and “better days” await them.

Speaking at a meeting with his Syrian counterpart, Hamoudeh Sabbagh, on the sidelines of the 137th assembly of the Inter-Parliamentary Union (IPU) in Russia’s St. Petersburg, Larijani hailed Syria’s resistance against foreign-backed terrorist groups over the past five years.

“You have passed through a five-year-old crisis and the future of Syria is promising,” he said, adding, “Today, you should think about consolidation of peace in Syria and normalization of diplomatic relations with the world.”

Larijani went on to say that although the Syrian crisis is nearing its end, the Middle East region’s crisis continues and so should the campaign against terrorism.

The Syrian parliamentarian, for his part, expressed his gratitude to Tehran for backing Damascus and said the Arab country will not forget the Islamic Republic’s supports for the resistance of Syria.