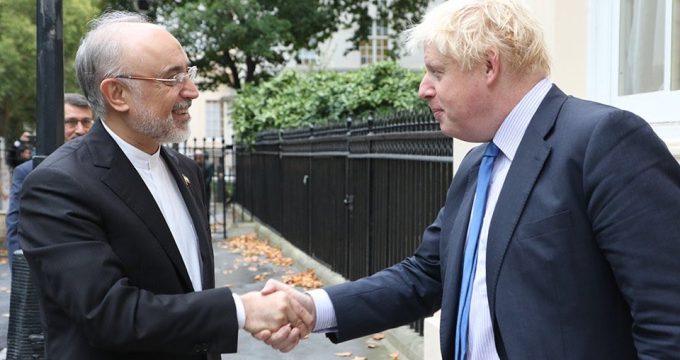 Salehi in London for conferring with British officials

October 12, The Iran Project – Head of the Atomic Energy Organization of Iran (AEOI) Ali Akbar Salehi on the second leg of his European tour left Rome on Wednesday (October 11) and arrived in London to hold talks with senior UK officials at the invitation of UK Secretary of State for Foreign and Commonwealth Affairs Boris Johnson.

While in London, Salehi held talks with Johnson, met with members of foreign relations committee of the House of Commons as well as a group of media elites and researchers of British think tanks.

In the meeting between Salehi and Johnson, issues like existing concerns on position, credit and ways to confront with nuclear deal threats by the US government were discussed and considered.

Johnson’s statement noted that the UK, France and Germany are clear that Iran has upheld its nuclear commitments, adding that Iran nuclear deal was a ‘crucial agreement’ and the UK supports the deal.

“I remain steadfast in my view that the nuclear deal was an historic achievement that has undoubtedly made the world a safer place,” Johnson added.

Moreover, following the meeting with Johnson, the nuclear chief said Iran has “prepared itself for various scenarios,” and will undoubtedly deliver a proper response, Salehi stated.

Salehi also met with the members of House of Commons in the venue of Britain parliament and discussed Joint Comprehensive Plan of Action (JCPOA) with them.

In a meeting with a group of media elites and researchers of British think tanks, Iran’s top atomic energy official said that breaching the 2015 nuclear deal by the US President Donald Trump will entail global repercussions.