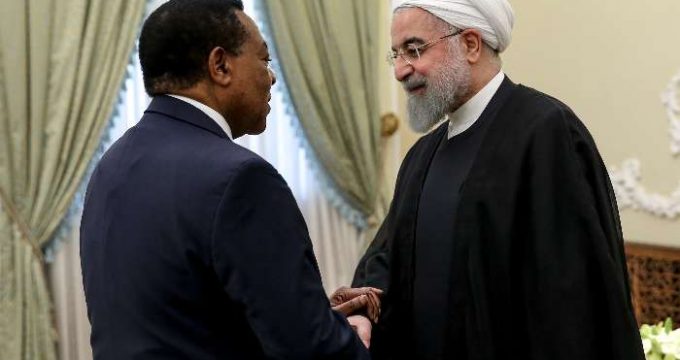 President in a meeting with Tanzanian Foreign Minister: Deepening ties with African countries a key principle in Iran’s foreign policy

Dr Hassan Rouhani met with Tanzanian Foreign Minister Augustine Mahiga on Wednesday and expressed interest in promoting the level of relations and cooperation between the two countries in all fields, especially economy, adding: “Tanzania is Iran’s gateway to access the East African market and the 12th Administration is determined to develop relations with friend countries around the world, especially in Africa”.

Dr Rouhani also thanked the Tanzanian President for his invitation to make an official visit to Dar es Salaam, saying: “Tanzania is a friend country with 900 years of cultural and historical ties between the two nations, which is a valuable investment in the development of cooperation”.

Powerful Iranian companies in the field of engineering are ready to advance development projects in Africa, including Tanzania, said Rouhani adding: “Economic cooperation should be developed and deepened along with the existing historical, cultural and political ties between Iran and Tanzania, and the first step in this direction is developing monetary, financial and banking relations”.

Dr Rouhani also called for establishment of a joint economic commission between Iran and Tanzania and said: “In the session of the commission, the scope for developing commercial and economic cooperation as well as ways to strengthen scientific and technological relations will be discussed”.

Terrorism is a major global scourge, said the President adding: “All countries should unite in the fight against this scourge”.

“The fact that no one dares to openly support terrorist groups of various names, including Jabhat al-Nusra, al-Qaeda, al-Shabaab, Boko Haram or ISIS, is a major progress”.

The president went on to say: “The Islamic Republic of Iran is ready to provide its friends with its experiences in combatting terrorist groups”.

The Minister of Foreign Affairs of Tanzania also emphasised that Tanzania was determined to cement its relations with the Islamic Republic of Iran in all fields of mutual interest.

Augustine Mahiga added: “Tanzania welcomes the presence of Iranian companies in the implementation and development of its developmental projects”.

“Iran is a friend country in historical, cultural and political fields, and we are interested in deepening and strengthening economic relations, and Iranian products can be supplied to the East African market through Tanzania”.

He also referred to the scourge of terrorism in regional and global stages, saying: “Tanzania wants to take advantage of the Islamic Republic of Iran’s experiences in countering not only terrorism and extremism, but also the fight against organized international crime, human trafficking and money laundering”.