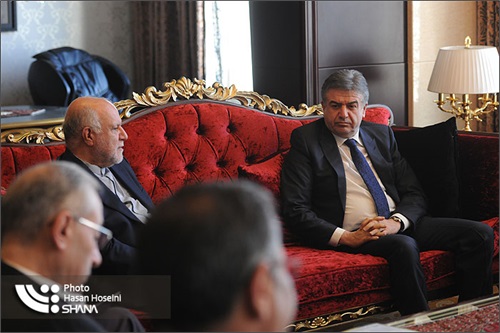 SHANA — A senior Iranian energy official said Armenia has indicated keenness to buy more natural gas from Iran, adding energy relations between Tehran and Yerevan will bolster in the future.

Following a meeting between Iranian Minister of Petroleum Bijan Zangeneh and visiting Armenian Prime Minister Karen Karapetyan in Tehran on Tuesday, Amir Hossein Zamaninia, deputy petroleum minister for international affairs and trading, said gas was the main topic of discussion during the meeting.

“During the meeting, the Armenian premier voiced his country’s keenness to purchase gas from Iran (besides bartering gas for electricity with Iran) and it was decided that more talks be held on the matter with the National Iranian Gas Company (NIGC),” he said.

The official further added that Iran has also agreed to cooperate with Armenia in this regard.

“Today’s meeting was held in a friendly atmosphere in the framework of the interests of the two countries,” Zamaninia added.

“Iran will do it at Yerevan’s request,” Bijan Zangeneh said after their meeting in Tehran.

Zangeneh said that Iran would increase its gas export to Armenia before 2019.

He added that Iran has already increased the export to 3.5 million cubic meters per day, since Russian natural gas supply to Armenia through Georgia’s territory ceased temporarily.