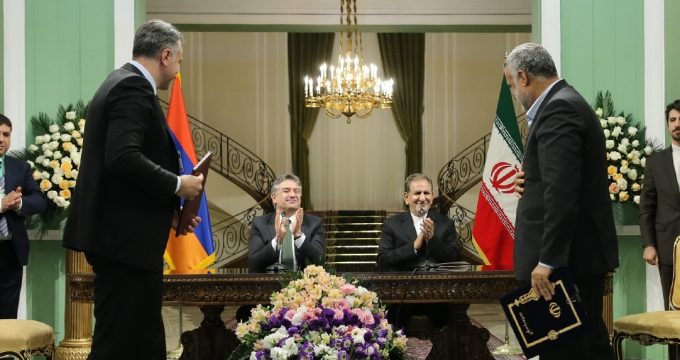 October 9, The Iran Project – Armenian Prime Minister Karen Karapetyan, heading a high-ranking delegation, arrived in Tehran on Monday to hold talks with the Iranian officials as well as signing agreements.

The Armenian PM landed in Tehran Monday morning for a two-day visit and upon arriving in Mehrabad airport, he was greeted by Sattar Mahmoudi, Iranian Deputy Minister of Energy.

Meanwhile, the Armenian PM and Jahangiri also reviewed issues of mutual interests and the ways for fostering all-out relations.

“We have no restrictions in maintaining cooperation with Armenia,” Jahangiri said in a joint press conference attended by Karapetyan.

He also referred to Armenian PM trip to Iran as developing ties and cooperation in the economic fields, adding that Armenia has important position in Iran’s foreign policy.

He pointed to talks on energy, electricity and gas, agriculture, alternate industries, technical and engineering firms, contracting, transportation, scientific and cultural fields as topics discussed by both sides.

Karapetyan, for his part, expressed his country’s readiness to attract more Iranian companies to the Armenian market.

He pointed to high-level relations between Iran and Armenia, and said both sides held talks on maintaining cooperation on regional issues.

Karapetyan also pointed to Iran’s point of view about Karabakh dispute between Armenia and Azerbaijan, and said both sides are aware of the ways to promote cooperation in different fields.

During his meeting with Jahangiri, the two sides signed three documents and MoUs in the field of veterinary and animal health, cultural and artistic exchanges, and cooperation between Iranian Vice-Presidency for Science and Technology Sorena Sattari and Ministry of Economic Development and Investments.