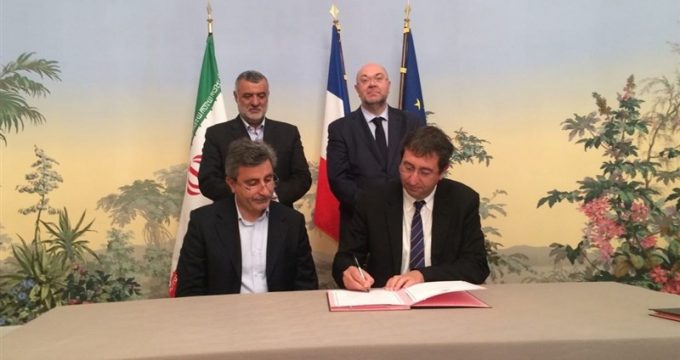 Tasnim – Iran and France on Friday signed four cooperation documents for improving the cooperation between the two countries’ agricultural sectors.

The cooperation documents were singed between the Iranian and French companies in fields of agriculture and animal husbandry in a ceremony held in the presence of Iran’s Agriculture Minister Mahmoud Hojjati and his French counterpart Stéphane Travert.

Iran’s agriculture minister heading a high-ranking delegation is in France and paid a visit to one of the largest international livestock trade shows in Clermont-Ferrand, on Thursday.

Iranian Agricultural Jihad Ministry along with 13 private companies have attended 26th edition of Sommet de lElevage livestock show and are special guests of the exhibition which is held in Cournon dAuvergne near Clermont-Ferrand from 4-6 October.

During the trip, Iranian agriculture minister met his French counterpart Stéphane Travert, and called for improvement of cooperation between the two states in fields of herbal drugs and processing and complementary industries.

The first session of Iran-France Joint Agricultural Committee was held on May, 2015 on the sidelines of Agro-Food Exhibition held in Tehran.

Iran and France have agreed to expand cooperation in farming, fisheries and agricultural research. Both sides agreed to form a joint agricultural committee that is tasked with handling the joint projects in this regard.