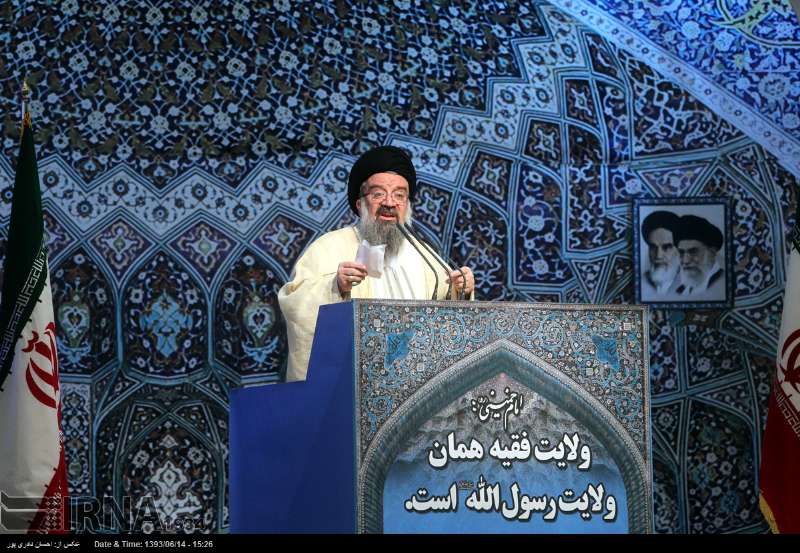 MNA – Ayatollah Khatami has emphasized that Americans call for renegotiation of the JCPOA while Iran believes that the agreement cannot be reconsidered.

Ayatollah Ahmad Khatami, who led the Friday Prayers today, appreciated the glorious mourning of the Iranian nation during Muharram saying “such a nation will never again undergo oppression.”

He also referred to elegant funeral ceremony of martyr Mohsen Hojaji who was beheaded by ISIL terrorists explaining that honoring one martyr was mean expressing gratefulness to all defenders of Holy Shrines.

Touching upon national week of law enforcement, the cleric noted that Law Enforcement Force of the Islamic Republic of Iran brought honor and dignity to the country and has had a strong and admirable presence in important security arenas; “no development would take place in the absence of security.

At another part of his remarks, Ayatollah Khatami pointed to the Joint Comprehensive Plan of Action asserting that “the US has violated both content and spirit the international deal.”

“Americans call for renegotiation of the JCPOA while Iran believes that the agreement cannot be reconsidered,” stated the official underscoring that even Europe cannot be completely trusted over the issue.

On the referendum on the Kurdistan Regional Government (KRG), Khatami expressed regret that Iraqi Kurdish authorities committed a treason by refusing to act in line with reason; “fortunately, the world, including the US and the Zionist regime, did not recognize the referendum and the unity and alliance between Iran, Iraq and Turley marks a suitable venue for resolving the issue.

At the end of his remarks, the cleric slammed killing of tens of people in Las Vegas explaining “Iran condemns killing of innocent people anywhere in the world, being in the US or Yemen.”

“Nevertheless, remaining indifferent to deaths in Yemen, Bahrain and Syria, and merely paying attention to the Las Vegas incident is unacceptable,” he underscored.