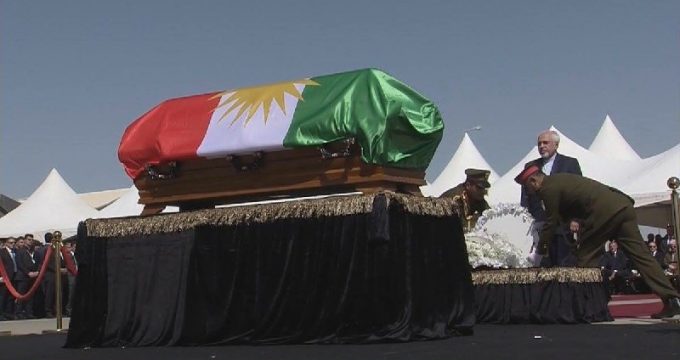 A special ceremony was held on Thursday with the participation of the leading Iraqi and international political figures, including the Iranian foreign minister, to pay tribute to the body of the late Talabani at the Sulaymaniyah Airport, northern Iraq.

Zarif laid a wreath of flowers on Talabani’s coffin as a sign of respect to the prominent Iraqi Kurdish leader.

The ceremony was also attended by President Fouad Masoum of Iraq, Head of Democrat Party Masoud Barzani and KRG Prime Minister Nechirvan Barzani, representative of the UN secretary general in Iraq as well as the US and British ambassadors in Baghdad who paid tribute by throwing petals on Talabani’s body.

The former Iraqi president and secretary general of the Patriotic Union of Kurdistan (PUK) party passed away in a German hospital on Tuesday after suffering a long time illness following a brain stroke in 2012.

He was the first non-Arab president of Iraq, elected in 2005, two years after the US-led invasion toppled the Iraqi dictator Saddam Hussein.