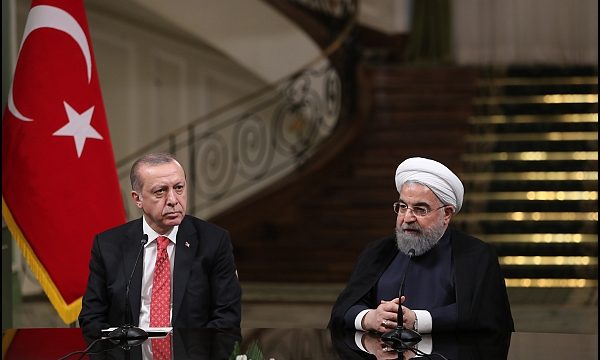 Iran, Turkey against any disintegration plot in region: Pre. Rouhani

MNA – President Rouhani of Iran told the joint presser following his meeting with Turkish President Erdogan that Iran and Turkey are both against cross regional plots against ME.

“Iran and Turkey as the two Muslim, friendly, and powerful countries of the region are the anchors of stability in the Middle East,” asserted the Iranian President Hassan Rouhani in the joint presser after his meeting with visiting President Erdogan of Turkey.

“I am delighted to underline this point that the relations between Iran and Turkey in the areas of culture, politics, economy, and regional issues have been steadily growing,” affirmed the Iranian president.

“In the private meeting of today with the president of Turkey, and also in the meeting of the fourth Council of Strategic Cooperation, we made important decisions on developing economic relations between the two countries,” highlighted Mr. Rouhani.

“Expanding banking relations between the two countries and trade with the national currencies of the two countries were the two most significant decisions of today,” affirmed the Iranian top executive, “it was arranged to put the made decisions into practice by the end of the current week.”

The Iranian top official recounted that robust talks have been held between the Iranian and Turkish officials on regional issues, especially Syria and the Kurdistan Region of Iraq.

“Cooperation between Iran, Turkey, and Russia especially about Syria has increased the same way trilateral coordination between Iran, Iraq, and Turkey has risen over the issue of Kurdistan region of Iraq,” confirmed the Iranian president.

He maintained that the escalation of sectarian and ethnic tensions in the region is the plot of anti-regional conspirators. Mr. Rouhani affirmed that Iran and Turkey both are against disintegration in the region, “from our joint perspective, Syria and Iraq are two separate and single countries of the region and we assuredly oppose any change in the geography of the region.”