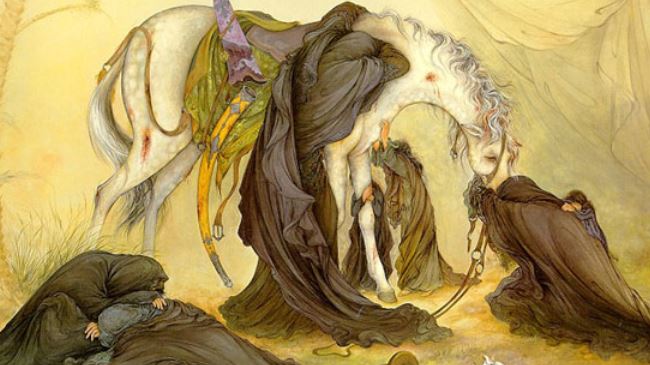 Ashura: When the truth does not necessarily rhyme with numbers

American Herald Tribune | CATHERINE SHAKDAM: There has been an ongoing debate on social media over both the inherent religious nature of Ashura – the pertinence and essence of its message, as well as its socio-political dynamics.

Often viewed through the lense of sectarianism, for prejudices have dictated that all that constitutes Shia Islam be shun, many remain in ignorance of Imam Hussain’s movement – which movement was meant as a reform and a liberation for all communities so that justice be restored.

I believe Seyed Muhammad Hussain Fadlallah’s words on the matter to be rather pertinent:

“From Ashura, we enrich ourselves with its various dimensions and meanings. Our problem is that we gave Ashura sectarian meanings and locked it in the prison of our creeds and backwardness and customs which lack any cause, because we did not see the cause which Imam Hussain (as) represents, but the person who is filled with wounds, the one who experienced thirst and the tragedy of his sons and relatives. We looked at Imam Hussain (as) as the person, not the mission and the cause. So we abandoned the mission and did not find Imam Hussain (as) and we will never find him if he does not represent to us a mission, freedom, glory, dignity and an entity that represents mankind and Islam. This is the real essence of Ashura.”

Indeed, it would be to betray Imam Hussain’s sacrifice to reduce his martyrdom down to a sectarian exercise, a claim posited by factions upon that which was meant to be a universal cry against Tyranny – that which saw negated the legacy of the Prophet Muhammad, and the legitimacy given to his House [Ahlulbayt] by Divine appointment.

If Shia Muslims have been most vocal in their mourning, the tragedy of Karbala is not their monopoly – not that any ever claimed it to be so … And yet the Day of Ashura has been depicted as being Shia, as if such label would somehow imply religious irrelevance.

With Saudi Arabia leading the media narrative, the rule of thumb has been to divorce Ashura from normative Islam, pinning its tragedy under sectarian misapprehension and layers of cultural bias so that its message – the very truth it carries, would be lost to distortion.

Ironically it is against such distortions, manipulations and altogether mutilations that Imam Hussain set out to Kufa over 13 centuries ago … it seems in that respect that man’s propensity to stray has remained a constant.

In a letter sent to his brother Muhammad Hanafiyyah, Imam Hussain explained what three objectives he held in his opposition of Yazid;

1. To reform his grandfather’s nation

3. Revival of the traditions of the Holy Prophet and Imam Ali

I would say that our current socio-political set up and the way religion – and in particular Islam, has been conceptualised runs parallel to what Imam Hussain came up against as Yazid rose an army to proclaim his right to rule over that of the progeny of the prophet of Islam. He too wielded Terror as a weapon, and he too, manipulated religious texts so that to rationalise his heresy.

And yet Imam Hussain did not fight so that his name be restored in authority – there lies the greatest misconception of all. He stood so that Islam would not be pillaged by a self-conceited elite whose concerns were to distort the Scriptures to anchor falsified authority, and in the same breath deny the only authority that was ever asserted.

If Islam is in fact ‘complete’, then it stands to reason to believe that succession was not left to chance, but instead made apparent to avoid confusion upon the death of the prophet. While Islam exists beyond time, the prophet’s life was finite.

Communities’ decision to reject such command – however broad the consensus, does not negate it.

I would like to think that if anything, Karbala demonstrated how Truth does not necessarily rhyme with numbers, but rather those souls brave enough to defend it against Falsehood. If there is strength in numbers, righteousness seldom is.

Before an army of several thousands stood Imam Hussain and his 72 men … Before a multitude, the prophet’s grandson let out a cry which echo has rallied millions to its cause – on the basis of their common humanity, if not for the commonality of their faith.

Such is the nature of Imam Hussain’s Revolution!

It is maybe because there is Liberation to be found in Imam Hussain ibn Ali’s stand that his Shia – his followers, have been vilified to the point of demonisation. God forbid communities be offered freedom, especially in their disagreements! In religion the Quran states that there shall be no compulsion – it was to restore such right that Imam Hussain drew his sword … not because he wished it so but because any other course of action would have equated to a betrayal of the Word.

And “There is no day like the day of Al Hussain”