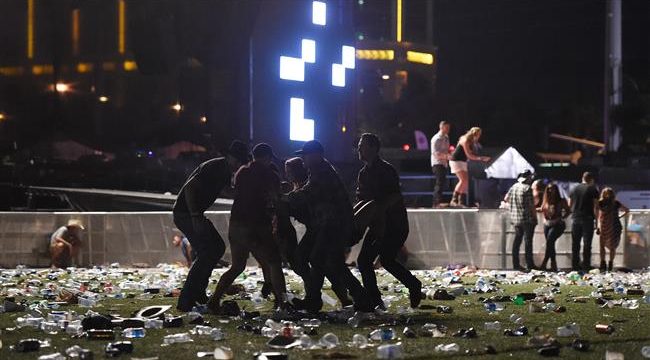 Press TV- Law enforcement authorities have discovered an arsenal of weapons and ammunition from the hotel room and house of the gunman who killed at least 59 people and injured another 527 at a music festival in Las Vegas, Nevada.

A total of 42 guns were found in the hotel room and house of 64-year-old Stephen Paddock, who rained down a barrage of bullets from the 32nd floor of the Mandalay Bay Hotel towards an open-air concert Sunday night, police said.

Las Vegas Police Department Assistant Sheriff Todd R. Fasulo said that 23 guns were found in Paddock’s hotel room, and 19 were discovered out of his home in Mesquite.

Among the guns and ammunition police found in the hotel room were high-powered rifles considered capable of penetrating police armor.

Sheriff Joseph Lombardo said that Paddock brought in at least 10 suitcases into his hotel room over a period of time.

In the aftermath of the massacre, many wondered how the gunman managed to fire for so long and so quickly to cause such carnage, raising questions whether Paddock had used banned automatic weapons.

However, it later emerged that the shooter had used a modified bump stock rifle, a legal trick that allows a gun to simulate rapid automatic gunfire.

In addition, law enforcement officials found “some explosives and several thousand rounds of ammo, along with some electronic devices” in the shooter’s property.

Authorities are also working to establish the motive behind the massacre.

The Bureau of Alcohol, Tobacco, Firearms and Explosives announced that it was “currently conducting an urgent trace on firearms recovered from the scene in Las Vegas.”

Investigators have found no link to international terrorism, despite a claim from the Daesh terrorist group. Some investigators said the gunman might have had psychological issues, but there is no confirmation of this.

Police initially said that they had engaged Paddock but later said they found him dead in the hotel room.

A gunman has opened fire on a music concert in what is said to be the deadliest mass shooting in modern US history.

Paddock was described as a gambler who lived in a quiet community of senior citizens and played golf. Officials said he had no criminal history and drew little attention to himself.

The mass shooting has once again thrust the bitter debate over gun control back to the center of politics in Washington.

As horror and disbelief rocked the nation, Congressional Democrats said the massacre underlined the necessity of new firearms laws, while Republicans only offered condolences and prayers.

In a televised address on Monday, President Donald Trump offered his “warmest condolences” for the victims of the mass shooting, but did not address the scourge of gun violence that has become a common occurrence in the country.

White House Press Secretary Sarah Huckabee Sanders said Monday that “there will certainly be a time for that policy discussion to take place, but that’s not the place that we’re in at this moment.”