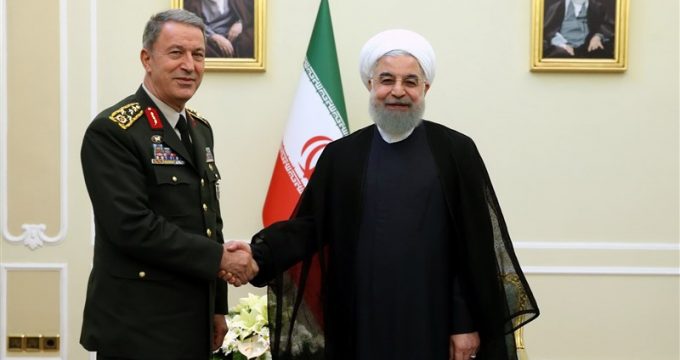 IRNA – President Hassan Rouhani described Iran and Turkey as two pillars of stability in the region, and welcomed reinvigorating of defense cooperation between Tehran and Ankara, including fighting terrorism.

‘Today the countries are having satisfactory political, economic and international relations; we should try to broaden our military and defense relations in pace with other areas as well,’ President Rouhani said in a meeting with Turkish Army Chief of Staff General Hulusi Akar in Tehran on Monday.

President Rouhani reiterated the need for fighting terrorism and safeguarding the geographical borders as most important goals for mutual cooperation between Iran and Turkey, and said, ‘Iran and Turkey as two important and influential countries in stabilizing the region can play a more effective role in settlement of regional problems and crises.’

The Iranian president said that Tehran and Ankara should broaden all-out relations in line with common interests.

‘The Iranian and Turkish armed forces can have constructive relations in line with removal of regional threats through sharing experiences and deepening of relations,’ President Rouhani said.

He underlined that Iran and Turkey as two Muslim and well-established regional countries face common regional threats such as terrorism, insecurity and instability.

President Rouhani underlined the need for making efforts in line with reinforcing the central governments in Iraq and Syria for the sake of territorial integrity, fighting terrorism and restoring stability to the region and not making changes to the geographical borders, and said, ‘Any lack of stability along the geographical borders will result in spread of insecurity and instability in the region.’