A Look at Iranian Newspaper Front Pages on October 2

Iran Front Page- IFP has taken a look at the front pages of Iranian newspapers on Monday, October 2, and picked headlines from 13 of them. IFP has simply translated the headlines and does not vouch for their accuracy.

After two days of holiday (the martyrdom anniversary of Imam Hussein, the third Shiite Imam and the grandson of Prophet Muhammad), all newspapers on Monday published photos of huge mourning ceremonies held across Iran and other Muslims states on their front pages.

Having been closed for three days (the two holidays plus Friday), newspapers started covering the most important international events of the past few days on their front pages.

A top story was Iranian Foreign Minister Mohammad Javad Zarif’s remarks about the nuclear deal between Tehran and world powers, and his prediction that Trump would refuse to confirm the Islamic Republic’s compliance with its JCPOA commitments.

Zarif, who was busy meeting with officials from other countries on the sidelines of the UN General Assembly and delivering speeches and giving interviews in New York, once again asked Europeans to defy US in case of the nuclear deal. He also described the renegotiation of JCPOA an impossible myth.

A few days after the Iraqi Kurdistan’s independence referendum, now newspapers are covering the plebiscite on Catalonia’s secession from Spain and the brutal reaction of Spanish police forces, which wounded hundreds of protesters. 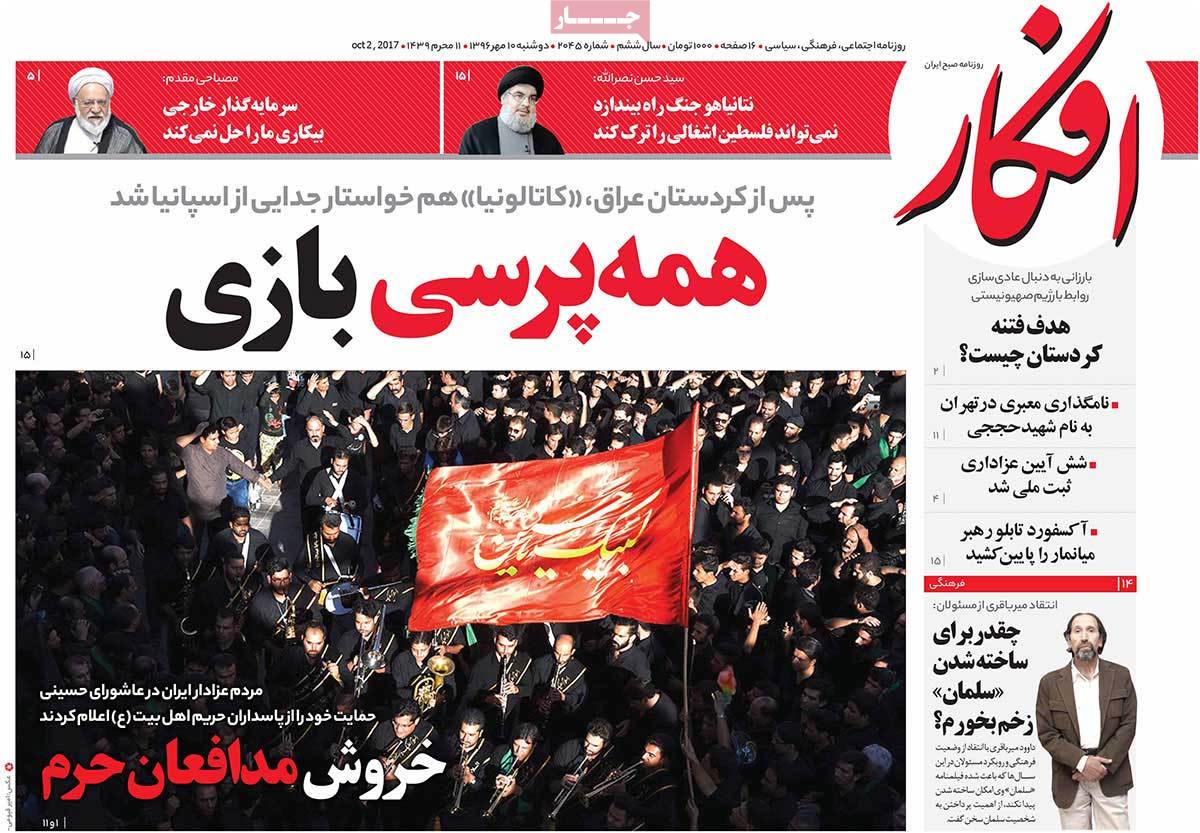 1- US Finally Accepts to Negotiate with North Korea 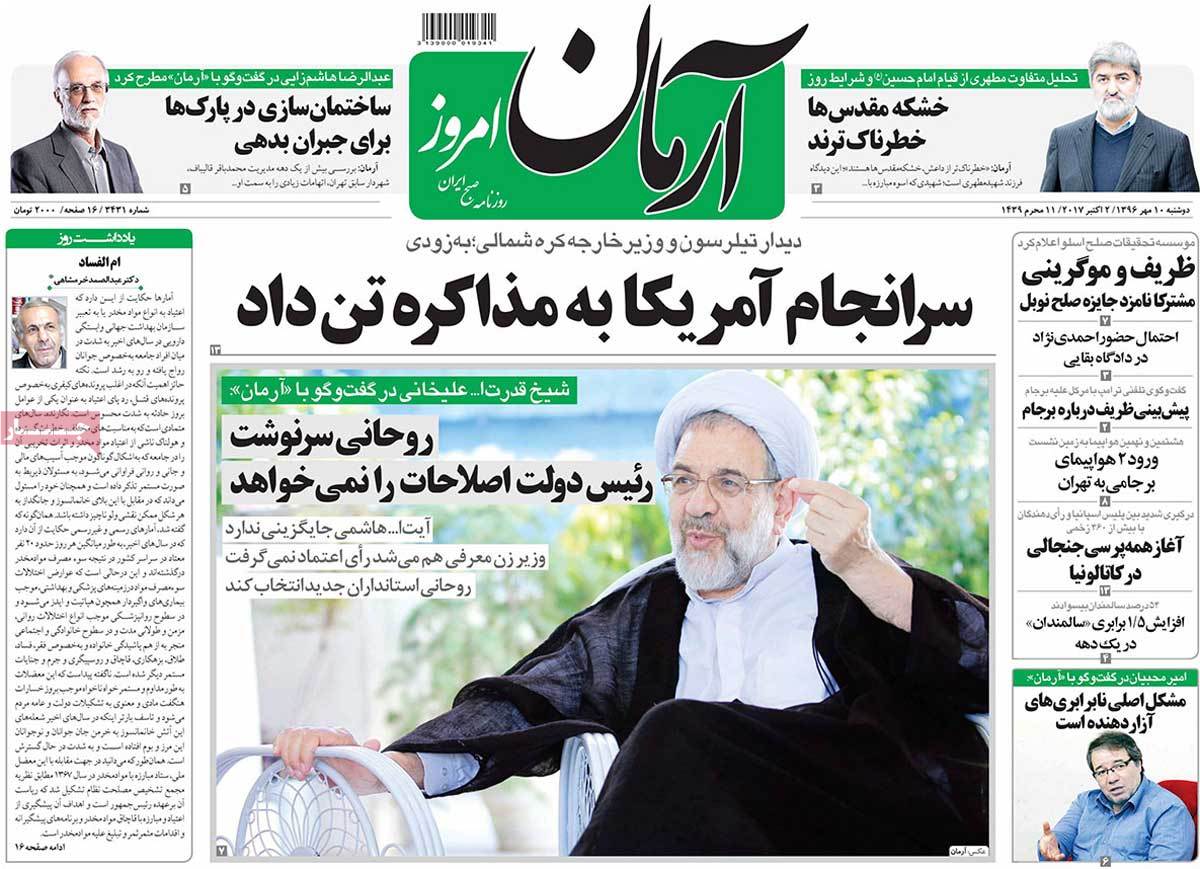 2- Shadow of Secession over Matadors’ Head 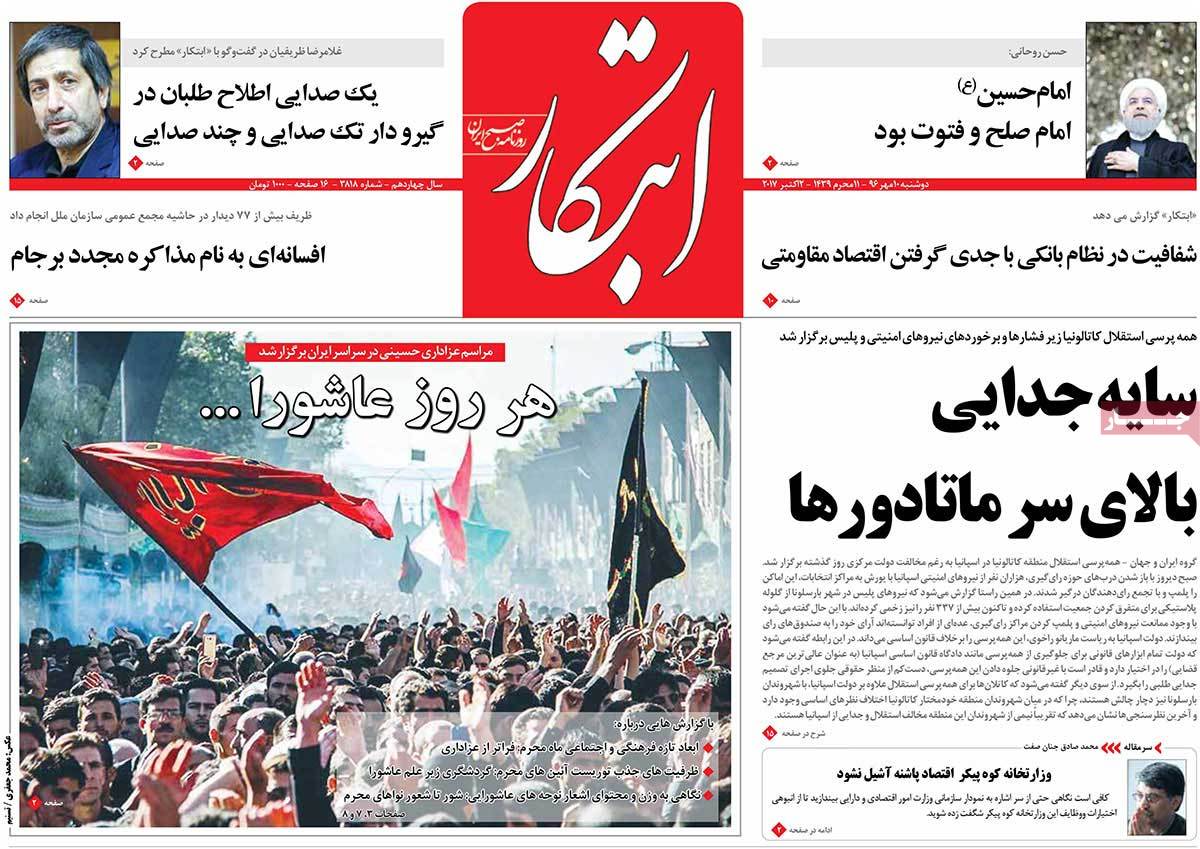 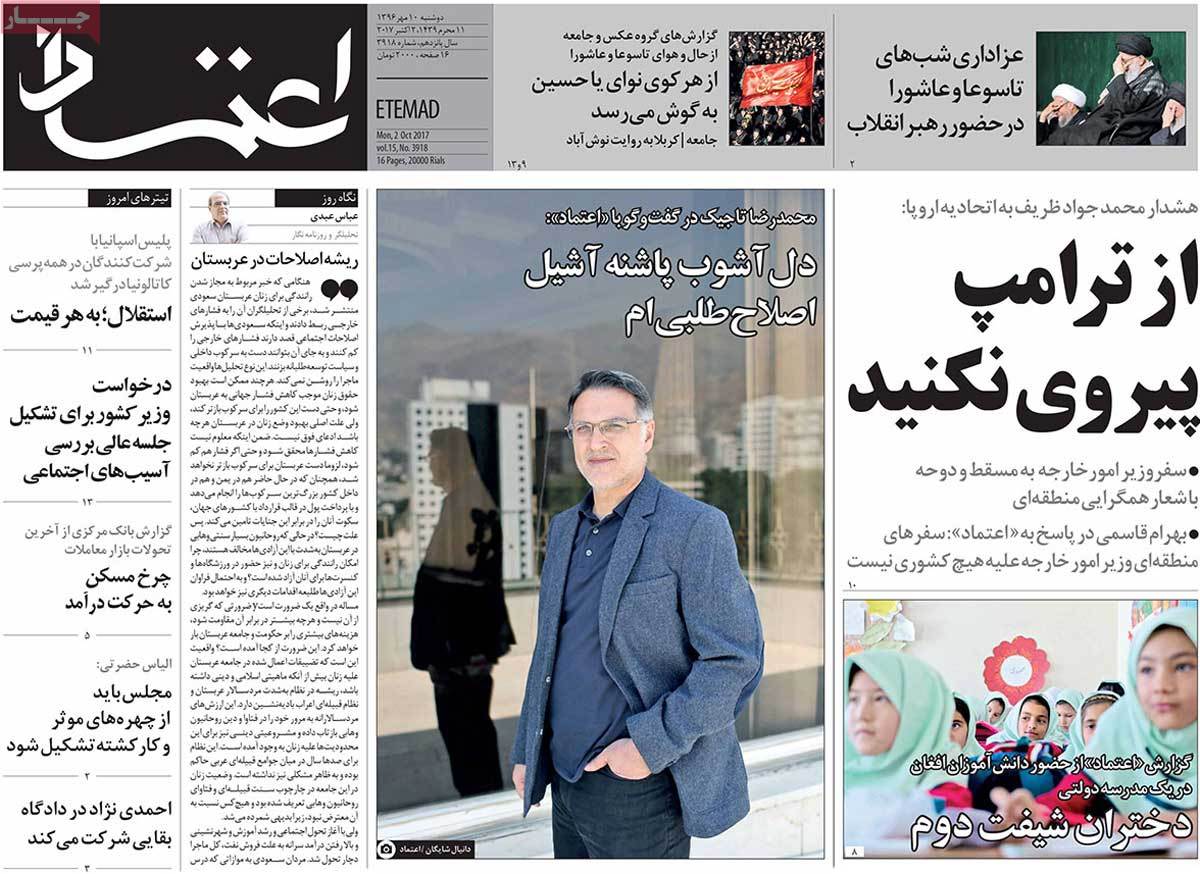 1- Zarif: Trump Has Violated All Aspects of Iran Nuclear Deal 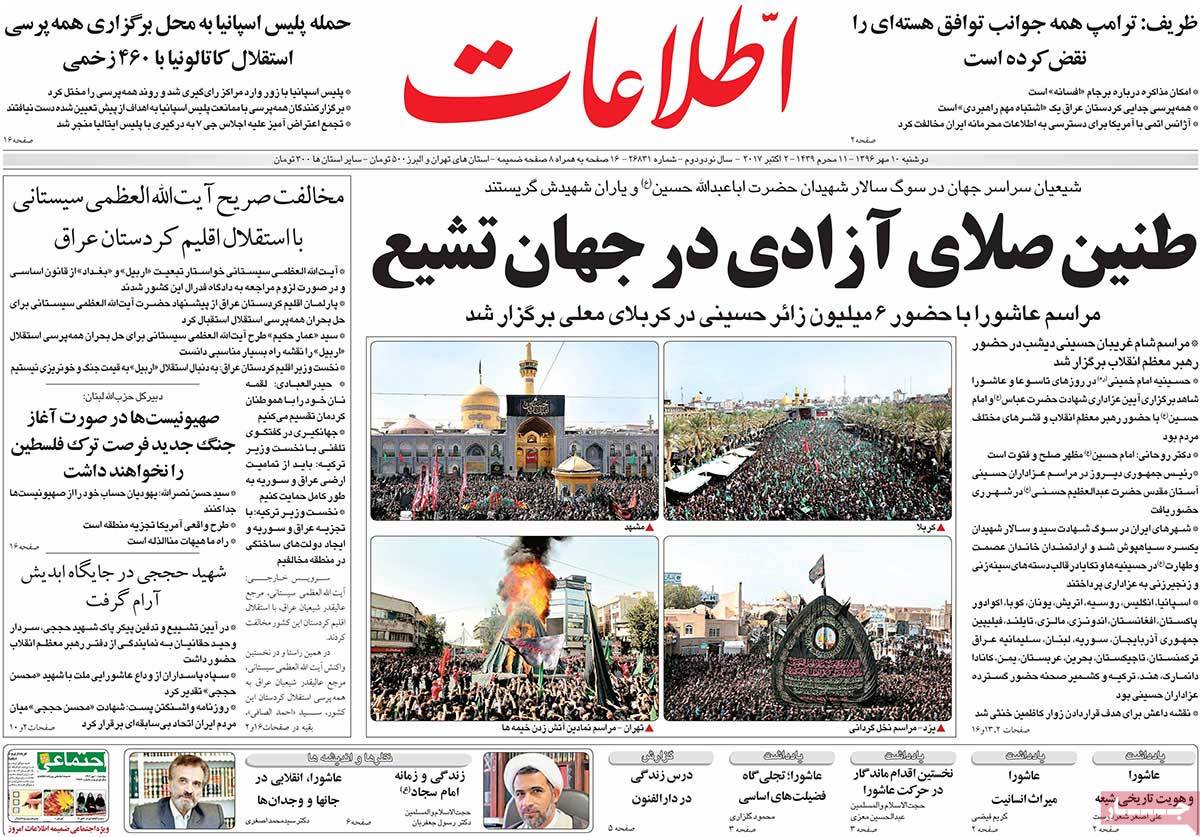 1- Zarif: Repetition of JCPOA Talks Is Sinking in Swamp 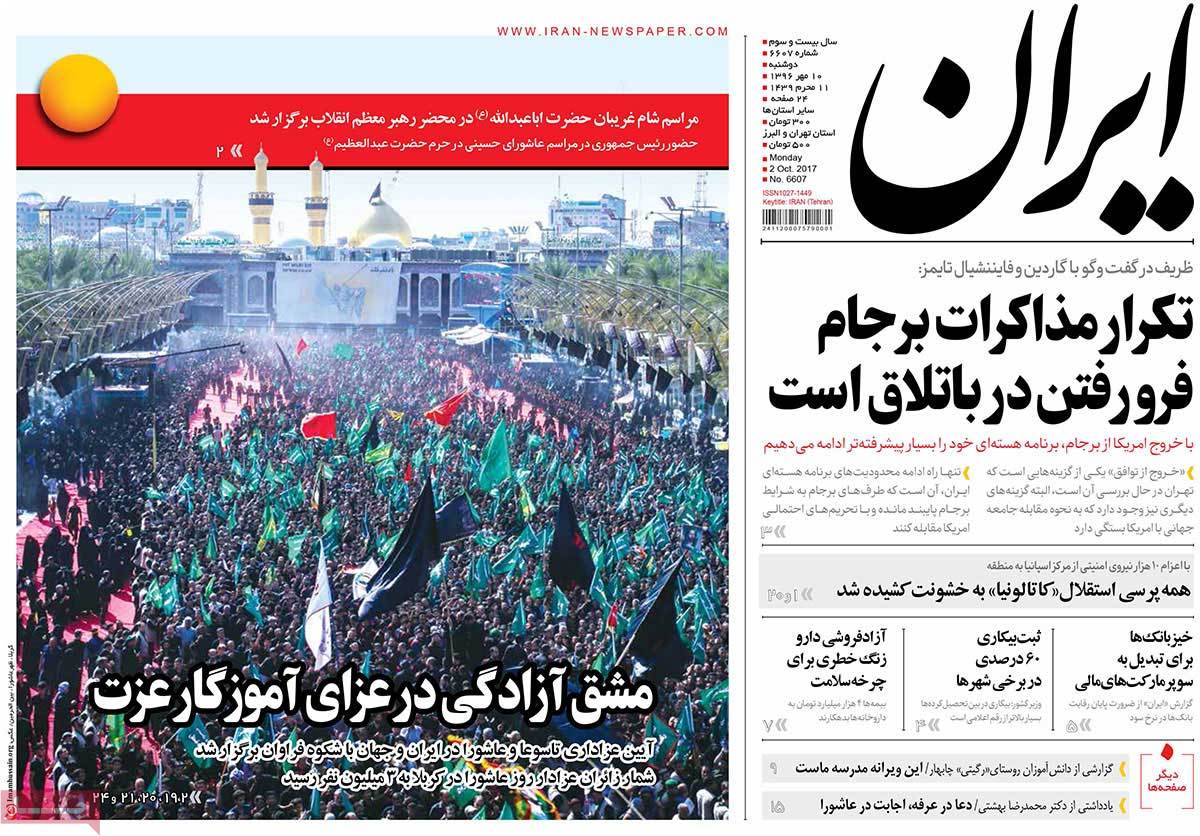 1- Spain Responds to Secession with Bullets 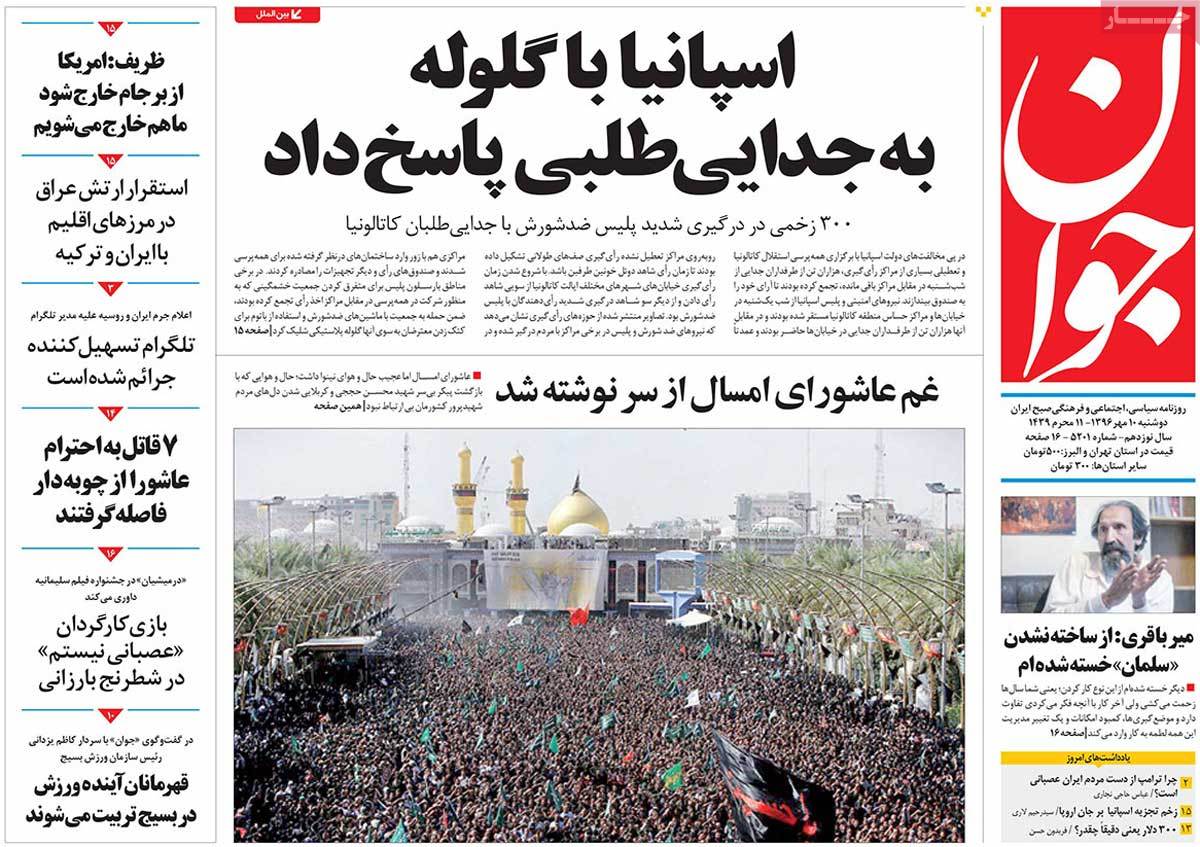 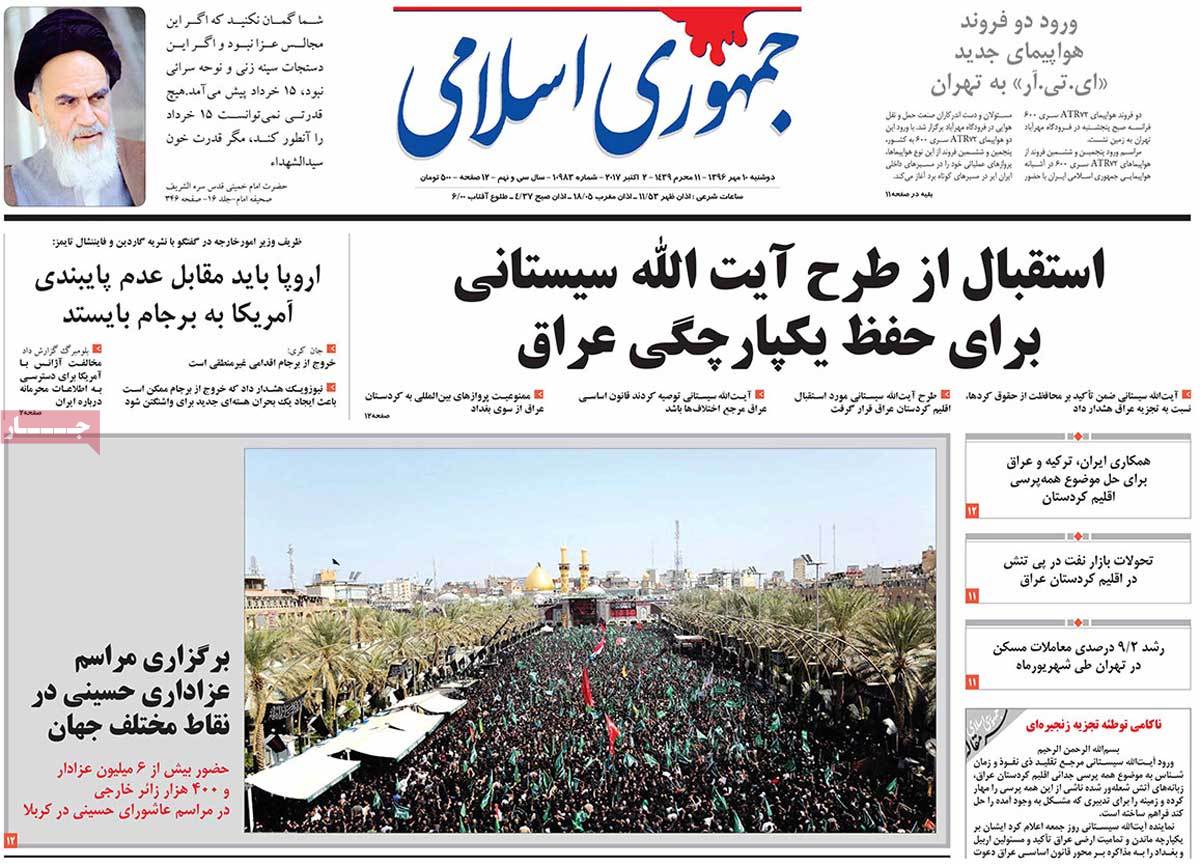 1- Kerry: In JCPOA, Iran Has Given All Concessions in Advance

2- Oil Spokesman: No Bank to Return to LC after Nuclear Deal 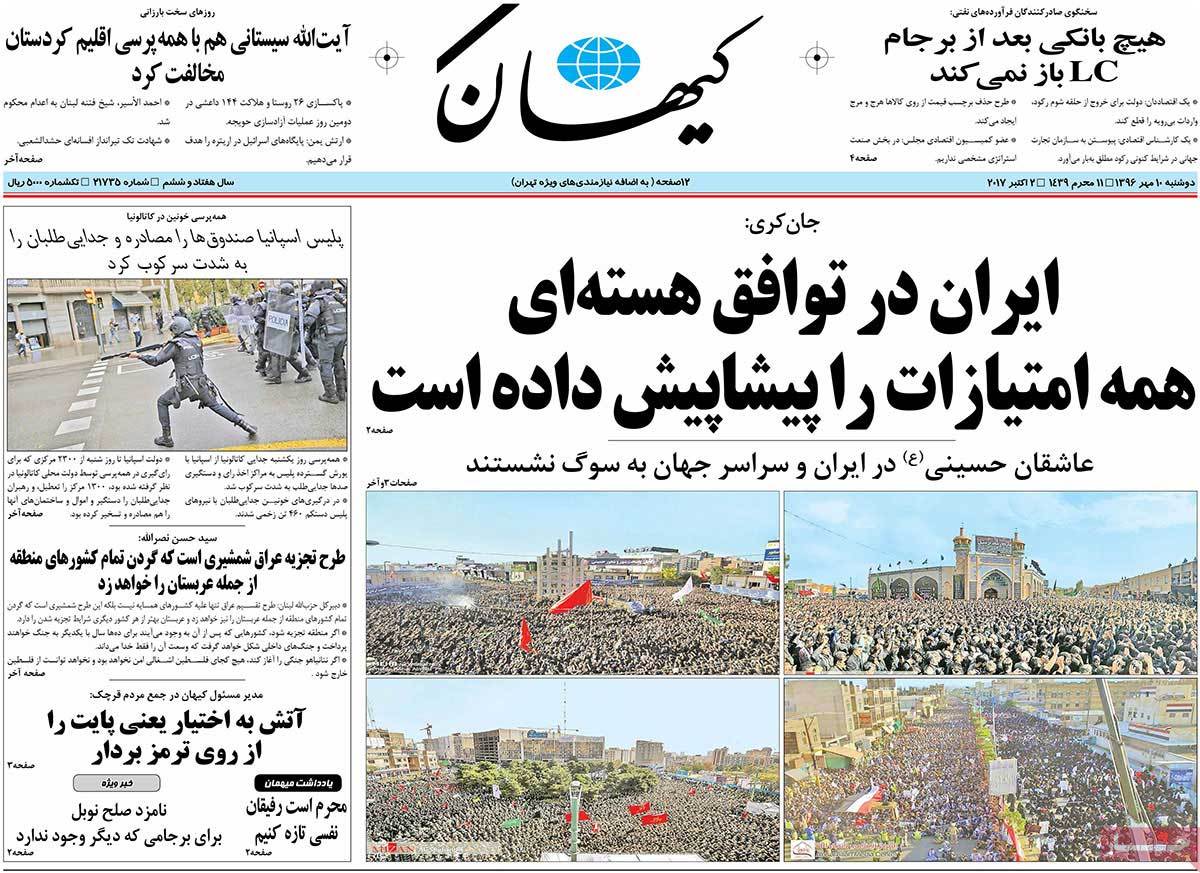 1- Ayatollah Sistani: Constitution Should Be Referred to Resolve Erbil-Baghdad Conflict

2- Europe Amazed by Iran’s Missile Power: The Power that Grows on Daily Basis 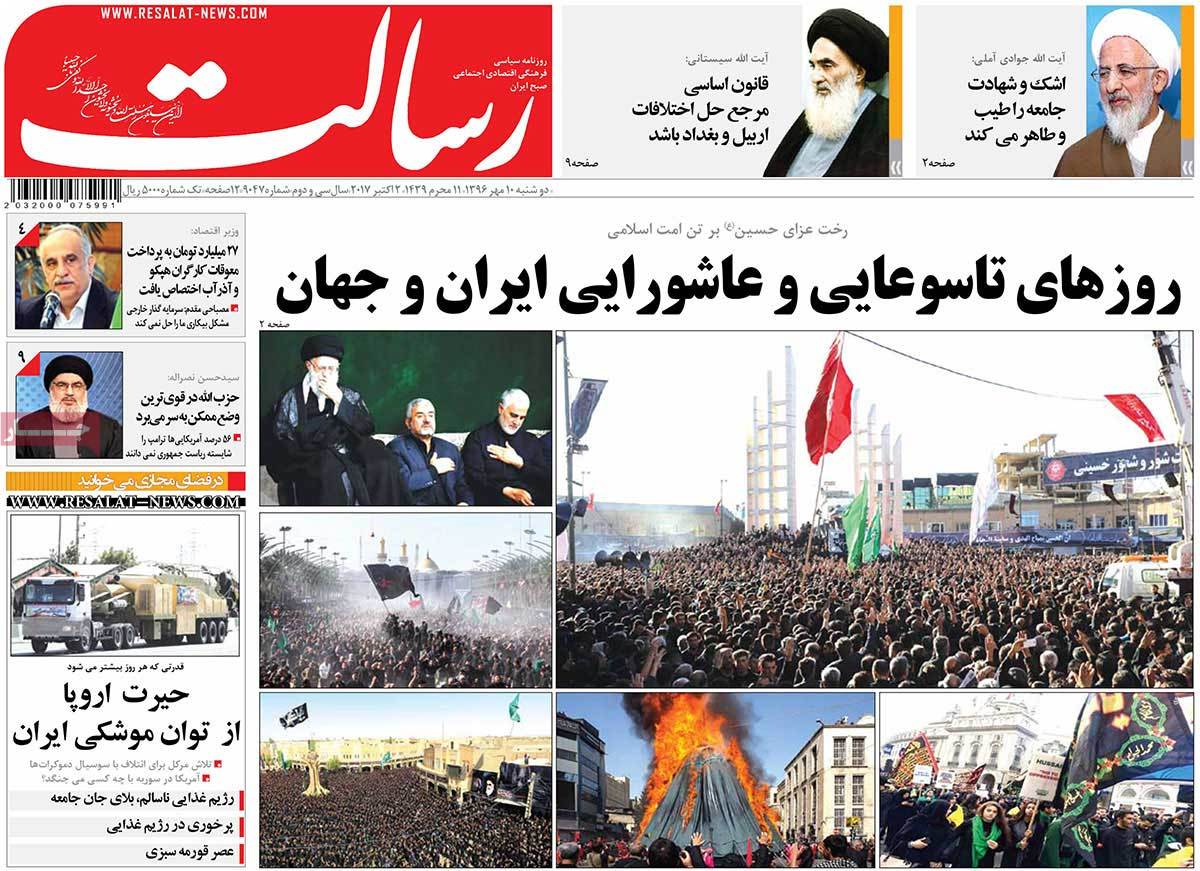 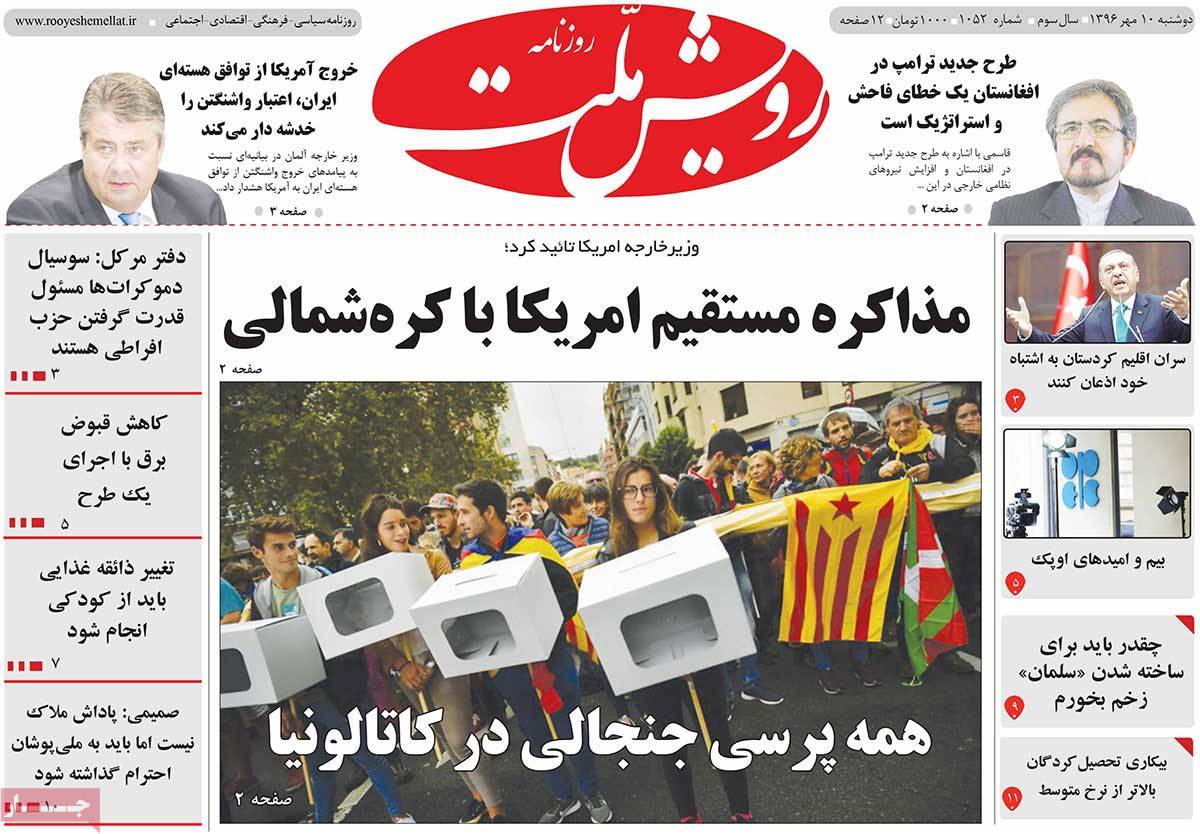 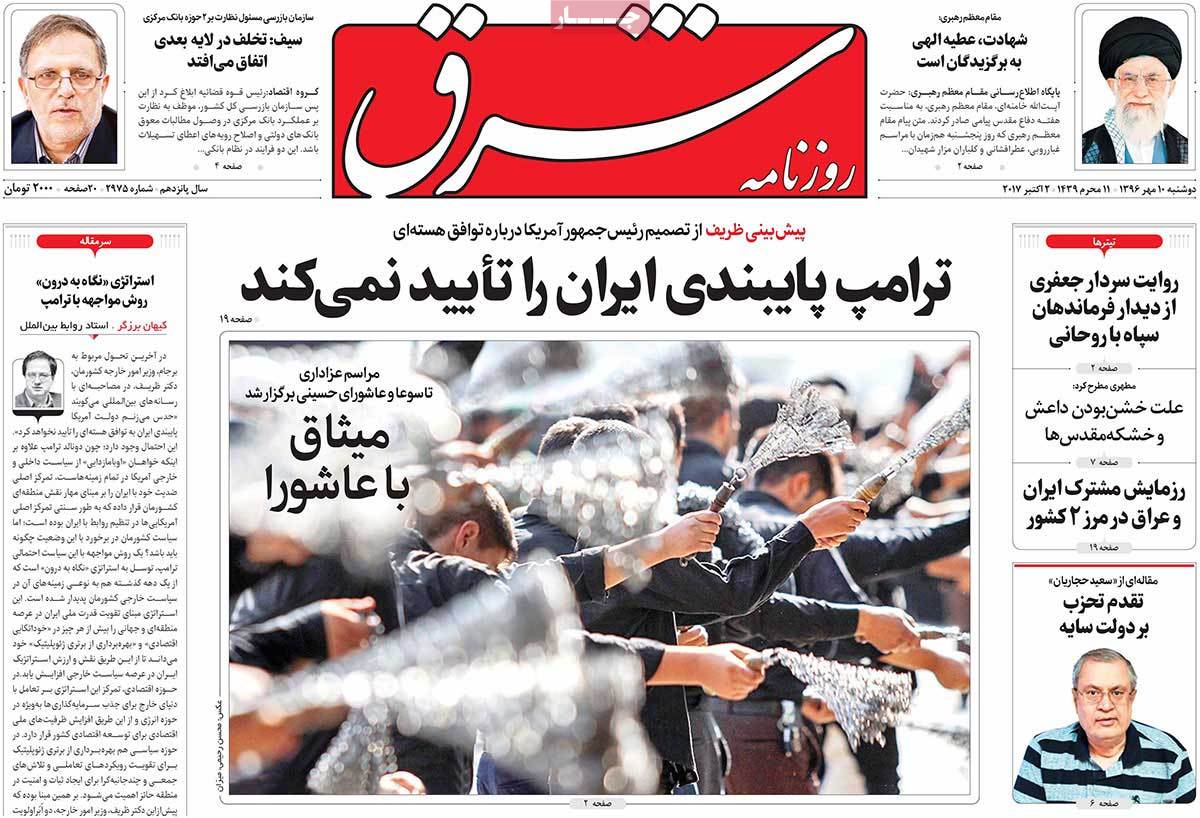 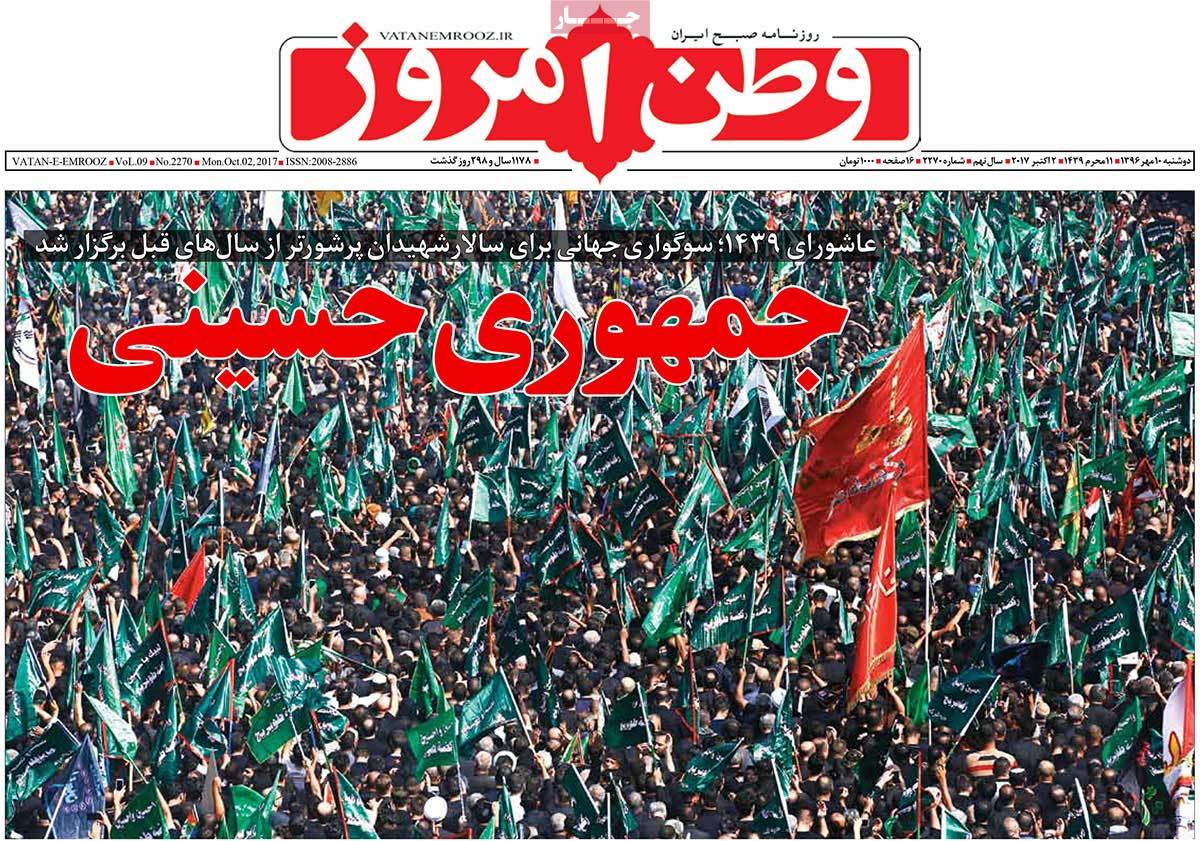