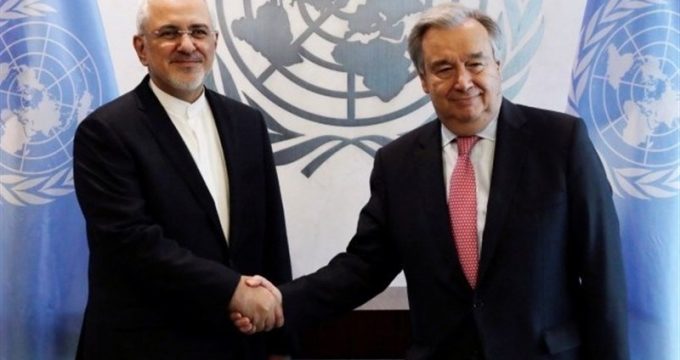 Working to a busy schedule on the sidelines of the 72nd regular session of the UN General Assembly, Foreign Minister Zarif had a meeting with Guterres on Wednesday evening.

In the gathering, the two sides discussed the Joint Comprehensive Plan of Action (JCPOA), a nuclear agreement between Iran and the Group 5+1 (Russia, China, the US, Britain, France and Germany), and the latest regional and international developments.

In a separate meeting, the top Iranian diplomat and President of UN General Assembly Miroslav Lajcak talked about the JCPOA, the regional developments, and the most pressing international problems, such as terrorism and emigration.

Foreign Minister Zarif had also another meeting with UN Deputy Secretary-General Amina J. Mohammed, in which they focused on the humanitarian efforts, the environmental issues, the threat of terrorism, and the plans on a reform of the UN structure.

Zarif has held dozens of other high-profile meetings on the sidelines of the UN General Assembly in recent days.