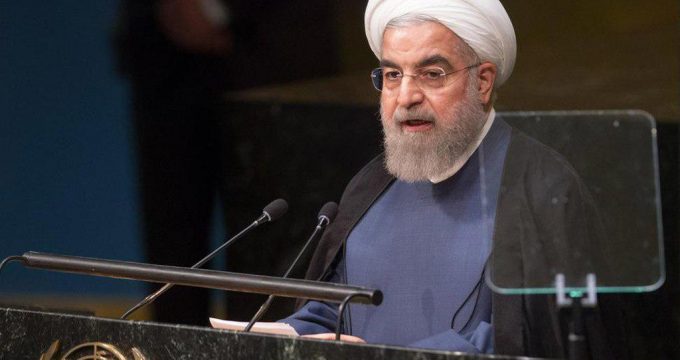 The art of turning threats into opportunities: On Hassan Rouhani’s UNGA speech

Rouhani’s meeting with Japanese PM Shinzo Abe may result in the latter’s visit to Tehran, the first in forty years by prime minister of a country with sizeable trade with Iran.

Rouhani’s public diplomacy was the more significant aspect of his trip however. Iran’s president addressed not only other world leaders, but also the global public opinion. His interviews with CNN and CBS was an opportunity used to re-introduce Iran to the world, make them acquainted with Iranian perspective, and speak with a language not of belligerence, but of mutual understanding.

Rouhani’s antagonist, US president Donald Trump, chose a radically different path in UNGA. In his first speech as POTUS, Trump once again lashed out at JCPOA, the historical nuclear deal between Iran and six world powers. However, his overtly myopic and passive speech failed to win support among attendees of the General Assembly.

What Trump fails to understand is that JCPOA is based on minimal denominators of the parties involved in the talks. That is, each side had to relinquish part of its demands in order to reach a common point with others and seal a comprehensive deal. Thus, despite its shortcomings, JCPOA was the optimal deal attainable at that juncture. The most important achievement of the JCPOA was its peaceful resolution of a regional and international impasse which could have otherwise resulted in military conflict.

While Trump’s speech was sensational, unreasonable and lacking a keenness for dialogue, Rouhani adopted a language of law and diplomacy for his speech and managed to create, not squander, opportunities during his four-day visit. Rouhani showed that unlike Trump, he knows the language of diplomacy.

Many countries, particularly those from the European Union such as France, Italy, Belgium, and Germany have shown interest in expanding relations with Iran after conclusion of the nuclear deal, and have signed agreements in financial and industrial sectors. Rouhani proved the soundness of their choice in his recent visit. Many inside Iran prefer to point at unfulfilled promises of the JCPOA, such as its failure to convince major international banks to resume cooperation with Iran. But facts such as agreements with the German Hermes cover or the French oil giant Total are ignored.

The success of JCPOA has even convinced Europeans to follow suit in case of North Korea, though their hopes soon vanished after Trump’s tirade against the pariah country in his UN speech and his strong threats against the country. Trump’s speech clearly showed how ‘force’ is the main drive of Washington’s diplomatic relations with the rest of the world, and in the meantime proved Iran’s shrewdness in its full compliance with the JCPOA. Iran is now at a juncture where the turn of events is in its favor and United States is facing isolation. By thorough implementation of the JCPOA and simultaneous call for other parties’ observance of the agreement, Iran can curb Washington’s adventurous behavior.

* This piece was originally published in the Reformist Shargh daily.