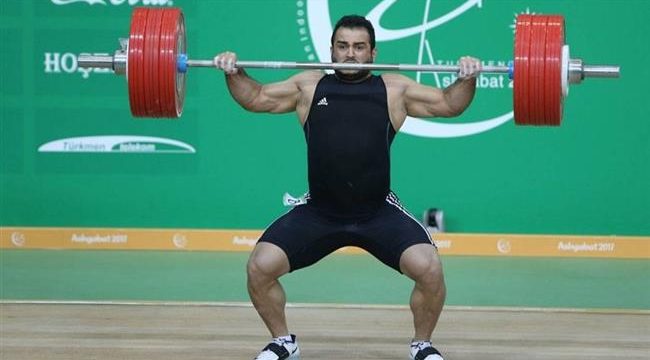 Press TV – Iranian weightlifter Sohrab Moradi has broken an 18-year world record and upset Georgian-Greek athlete Kakhi Kakhiashvili, after he lifted a total of 413 kilograms and set a new world record in the 94-kilogram weight class of the 5th edition of Asian Indoor & Martial Arts Games in Turkmenistan.

Kakhiashvili had created the previous record of 412 kilograms during the 1999 World Weightlifting Championships at Peace and Friendship Stadium in Piraeus, Greece.

Moradi earlier raised 176 kilogram above his head in his first snatch attempt as he and Uzbek opponent Farkhodbek Sobirov went toe-to-toe in a fierce battle.

The 28-year-old Iranian sportsman, who won the gold medal in the 94-kilogram weight division at the 2016 Rio Olympics, recorded scores of 185 kilograms in the snatch and 228 kilograms in the clean and jerk contests.

Moradi finished on an aggregate 26 kilograms ahead of bronze medalist Liu Hao of China.

In the women’s minus 75-kilogram weight division, Elaheh Rezaeighaleh did not manage to prevail over 19-year-old Kyrgyz wrestler Altynai Mamarasul Kyzy and received the silver.

Reyhaneh Sheikhian, Sahar Ghanizadehghara and Asiyeh Shojaei added three bronze medals to Iran’s medal tally in the women’s minus 60-kilogram, minus 65-kilogram and over 70-kilogram sections.

Alysh is an upright wrestling style. Competitors wear trousers, jackets and belts, and must hold on to their opponents’ belts at all times. Their objective is to throw their rivals onto the mat. Throws are given scores between 1 and 6, and the first player to win 6 points wins the match. The sport is regulated by International Federation of Wrestling of Belts “Alysh” (IFWBA).

Alysh has a centuries-old history in Iran, and is practiced in the country’s northern provinces of Gilan and Mazandaran, as well as southwestern Khuzestan Province and central-north Semnan Province.

Furthermore, Iranian horse jockey Ali Rahmati made a rather strong showing, and had a third-place finish in the international tournament.

Iranian cyclist Mohammad Daneshvar Khorram competed against rivals from various countries in the men’s Keirin heat, and picked up the silver medal. Pavel Vorzhev, a representative from Kazakhstan, stood on the top podium, and Thai contestant Pongthep Tapimay got the silver.

The 2017 Asian Indoor and Martial Arts Games, which is the 5th edition of the continental tournament, opened in the Turkmen capital city of Ashgabat on September 17, and will finish on September 27.