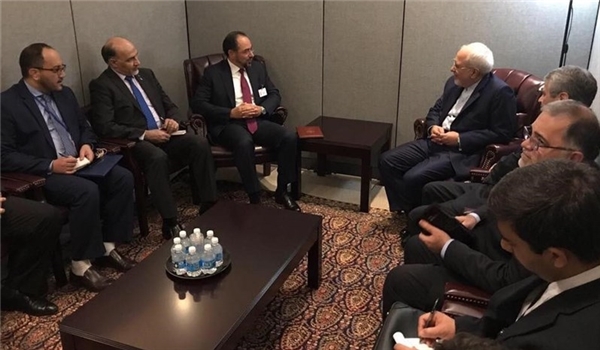 During the meeting held on the sidelines of the UN General Assembly conference in New York on Saturday, the two top diplomats also talked about the progress made in setting up five committees to pursue different issues in bilateral relations between Tehran and Kabul.

Rabbani said that Afghanistan is prepared to host three of the five committees.

Zarif, for his part, welcomed Rabbani’s comments, and stressed Tehran’s readiness to continue talks on the five specialized committees.

In a relevant development in June, Zarif and Afghan President Ashraf Ghani in a meeting in Astana, Kazakhstan, underlined the need for expanding mutual cooperation in different fields.

During the meeting in Kazakhstan’s capital, Zarif and Ghani explored avenues for bolstering and reinvigorating bilateral relations in both political and economic fields.

Both sides also exchanged views on the ongoing crisis among the Persian Gulf littoral states, urging them to solve their problems through dialogue.