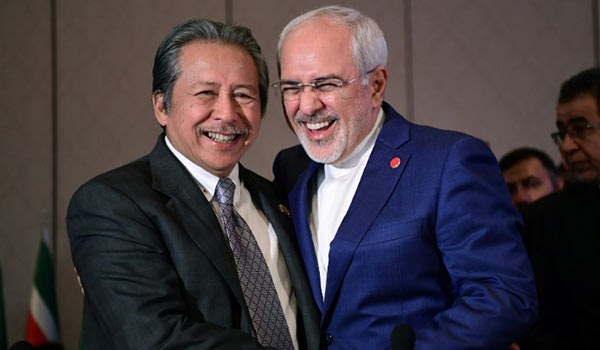 “There is a need for reinforcing Muslim unity in the Muslim world to resolve the current crises in the regional countries,” Zarif said during the meeting in New York on the sidelines of 72nd session of the United Nations General Assembly on Friday.

Zarif and Aman exchanged views on the expansion of relations within the framework of the international bodies, the Organization of the Islamic Cooperation (OIC) in particular.

The Iranian and Malaysian foreign ministers stressed the importance of reinforcing unity in the Muslim world to overcome crises in Yemen, Myanmar and Syria through peaceful approaches.

In relevant remarks in early August, Iranian Parliament Speaker Ali Larijani in a meeting with Chairman of the Caucasus Muslim Department (CMD) Sheikholeslam Haji Allahshakur Pashazade in Tehran called for unity among the world Muslims to help uproot the heinous phenomenon of terrorism.

“Under the current circumstances, the turbulent Islamic world is surely in need of any move for convergence of Muslims,” Larijani said during the meeting.

The Iranian parliament speaker underlined that an extremist group under the disguise of Islamic movement has taken the breath of Islamic countries giving way to enemies of Muslims, and said, “We demand an end to this process.”

Larijani, meantime, pointed to the status quo of Iran-Azerbaijan relations, and said, “Iran and Azerbaijan are friendly and brother countries who are on the same cultural wavelength and can therefore carry out positive measures in line with unity of Muslims.”

Pashazade, for his part, expressed the hope that all global issues will be resolved under leadership of Iran’s Supreme Leader Ayatollah Seyed Ali Khamenei.