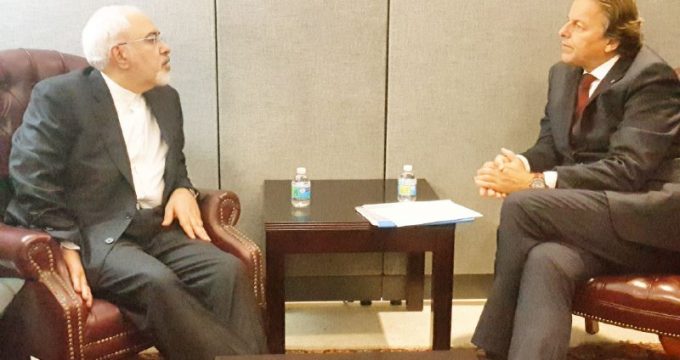 The Minister also attended Asia Cooperation Dialogue (ACD) meeting to take over the annual presidency of the body. The ministers and high-ranking officials of the 34 member states of the ACD took part in the meeting on Thursday.

Iran will also host the ACD assembly in fall 2018.

Zarif on the same day took part in the talks of a high level panel at the UN General Assembly on Syria, chaired by the EU’s High Representative for Foreign Affairs and Security Policy and Vice-President of the European Commission, Federica Mogherini.

The Iranian Minister emphasized that the only way out of Syrian crisis is a diplomatic one which is based on the UN Security Council resolution 2254.

‘We still urge ceasefire and collective campaign against terrorism, and believe that we have had much progress in that connection so far,’ he added.

The Iranian Foreign Minister had met his counterparts from Namibia Netumbo Nandi-Ndaitwah, from the Netherlands Bert Koenders, from Slovenia Karl Erjavec, and from Denmark Anders Samuelsen earlier on Thursday morning.

The main focus of the meetings were enhancing economic ties, improving the situation for Myanmar and Syrian refugees, and some regional issues, including independence referendum in Iraqi Kurdistan region and the historic nuclear deal between Iran and the world major powers, known as the Joint Comprehensive Plan of Action (JCPOA).