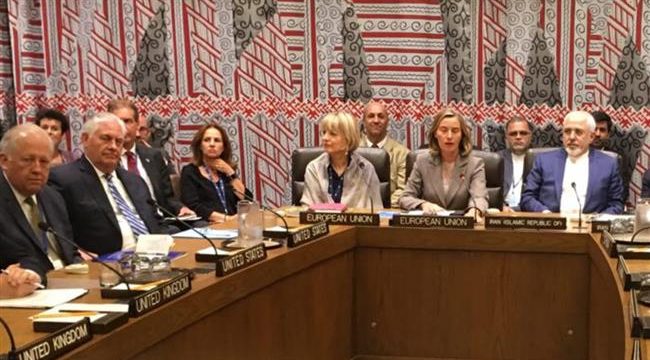 Press TV- Representatives from Iran and the six world powers have come together to highlight the necessity of complying with Islamic Republic’s nuclear agreement, despite threats by US President Donald Trump to scrap the deal.

We raised the issue of Washington’s non-compliance with the Joint Comprehensive Plan of Action (JCPOA) during the Wednesday meeting, said Iranian Foreign Minister Mohammad Javad Zarif.

All the representatives present at the meeting stressed “the necessity for the signatories to respect the JCPOA,” the Iranian foreign minister stated, adding that it was the second Joint Commission meeting of the JCPOA at the ministerial level on the sidelines of the UN General Assembly in New York.

Referring to the US president’s speech at the UN General Assembly, the Iranian foreign minister said Trump’s anti-Iran rhetoric proves that “the US is detached from the realities of the international community.”

Trump told the General Assembly on Tuesday that the nuclear agreement is an “embarrassment” for Washington, accusing Tehran of violating the deal.

US Secretary of State Rex Tillerson, for his part, said he had a “matter of fact” exchange with his Iranian counterpart, but he said that Washington still has “significant issues” with the nuclear deal.

“It was a good opportunity to meet, shake hands. The tone was very matter of fact. There was no yelling, we didn’t throw shoes at one another,” Tillerson said.

“It was not an angry tone at all. It was a very, very matter of fact exchange about how we see this agreement very differently.”

EU: No need to renegotiate the JCPOA

“There is no need to renegotiate parts of the agreement, because the agreement is concerning a nuclear program and as such is delivering,”  Mogherini told reporters at the United Nations on Wednesday.

“We all agreed that all sides are fulfilling their commitments,” she said, adding that the EU would exert all efforts to make sure the JCPOA stays in place.

The other signatories to the agreement — the UK, Russia, Germany, China and France — have reiterated their commitment to the deal on multiple occasions.

Ahead of the meeting, Trump told reporters that he had reached a “decision” over the deal without further elaborating.

“I have decided. I’ll let you know what the decision is,” he said.

Since Trump took office, the US has repeatedly threatened to abandon the agreement.

Meanwhile, French President Emmanuel Macron has said that he has still not given up on trying to change Trump’s view of the deal.

“Is this agreement enough? No. It is not, given the evolution of the regional situation and increasing pressure that Iran is exerting on the region, and given… increased activity by Iran on the ballistic level since the accord,” he said in apparent contrast to his Tuesday’s remarks where he defended the JCPOA in his first UN speech.

Iran has repeatedly insisted that its military capabilities are solely aimed for defense purposes and they pose no threat to other countries. The country has also been assisting its allies, including Iraq and Syria, in their ongoing fight against terrorism.

In his first UNGA speech, the French president warns that not respecting the multilateral nuclear deal with Iran will be “irresponsible.”

“This is a good agreement, an agreement that’s essential to peace,” the French president said.