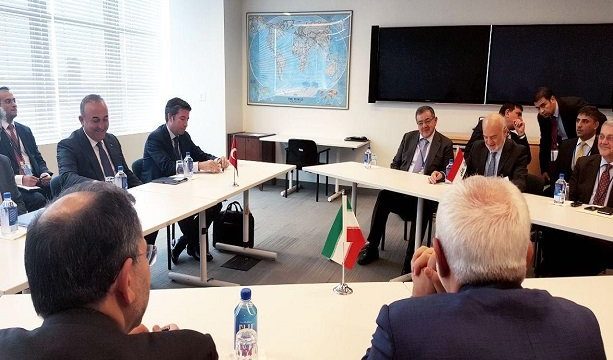 MNA – Foreign Ministers of Iraq, Iran and Turkey held a trilateral meeting in New York on September 20, 2017 to discuss the referendum plan of the KRG.

In the meeting, Iran’s Mohammad Javad Zarif, Iraq’s Ibrahim al-Jaafari, and Turkey’s Mevlüt Çavuşoğlu conferred on the Iraqi Kurdistan region’s upcoming referendum on independence slated for September 25, and reached agreement on a number of issues, which has been released as a statement. In the statement, the three ministers,

Reaffirmed their strong commitment to the territorial integrity and political unity of Iraq,

Welcomed the recent liberation of the Nineveh Governorate, which constituted a major victory against ISIL,

Acknowledged the perseverance, commitment and resolve of the people of Iraq as a whole in fighting ISIL,

Stressed the importance of keeping the focus on liberating the remaining areas that are still under ISIL control,

Underscored the importance of post-ISIL stabilization efforts to achieve lasting security and stability in Iraq,

Expressed their concern that the planned referendum by the KRG, which is scheduled for September 25, 2017, puts Iraq’s hard-earned gains against ISIL under great risk,

Further expressed their concern that the planned KRG referendum is unconstitutional and runs the risk of provoking new conflicts in the region, that will prove difficult to contain,

Registered their unequivocal opposition to the referendum,

Decided to urge the leadership of the KRG to refrain from holding the referendum,

Emphasized that the referendum will not be beneficial for Kurds and the KRG,

Agreed, in this regard, to consider taking counter-measures in coordination,

Recognized that constructive dialogue within the Iraqi constitution as the only way forward to address the issues between Baghdad and Erbil,

Stressed the importance of support of Turkey and Iran to resolve and contain this escalation,

Reiterated the need for concerted international efforts to convince the KRG on calling off the referendum,

Renewed their call on the international community to remain engaged on the issue.