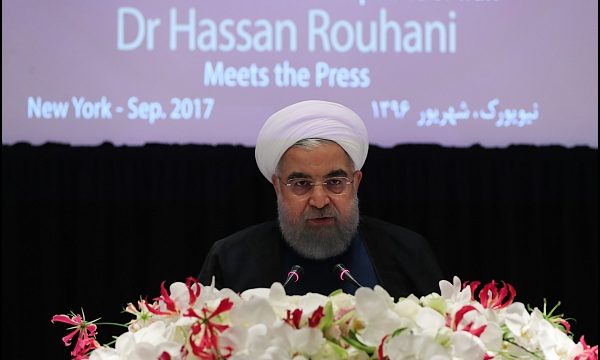 Iran may resume enrichment if US scraps nuclear deal

Following his address at the annual meeting of the 72nd UN General Assembly on Wednesday in New York, Iranian President Hassan Rouhani attended a press conference with international media, during which he focused especially on the future of the nuclear deal.

“If the US withdraws from the JCPOA, any obstacle ahead of any measures that we would consider in our national interest will be removed,” President Rouhani said in reaction to US President Trump’s anti-JCPOA remarks at the UN General Assembly.

About Iran’s measures in the face of US potential withdrawal from the deal, he said “the major part of the issue depends on the reaction of the European Union. We faced a different challenge during Clinton’s administration when the US was planning to enforce the transnational law against Iran, but the EU stood up against it and the US was forced to back away. As a result, European investors came to Iran and began doing business with us, while the US failed in its attempt. Therefore, what the EU decides to do will have a great influence on what we will do.”

President Rouhani also stressed that the JCOPA is a done agreement, adding “we have discussed every single word of the agreement and it’s not reversible. The agreement is like a structure that will collapse if one of the bricks is pulled out. JCPOA will either remain as it is or will end completely. It is not negotiable. No amendment will be added to it.”

Asked whether Iran would reactivate their dormant centrifuges if US walked away from the deal, Rouhani said “none of our options on the table include developing nuclear weapons. What Trump said were all accusations. We are talking about enrichment here, not developing atomic bombs.”

About the possibility of any negotiation between Iran and US under a new diplomatic framework and completely outside the JCPOA, Rouhani said “it is not realistic. For years, we had been talking about one single agreement and had very complicated and extensive negotiations with the 5+1 which included the US. And now after we finally reached an agreement, the Americans are making excuses to walk away from it.”

“In my opinion, if the US exits the nuclear deal, no one and no independent nation across the world will be willing to negotiate with them,” he stressed.

President Rouhani went on to say that Trump’s remarks at the UN General Assembly had offended the Iranian nation, and that he is waiting for the US president to apologize to the Iranians.