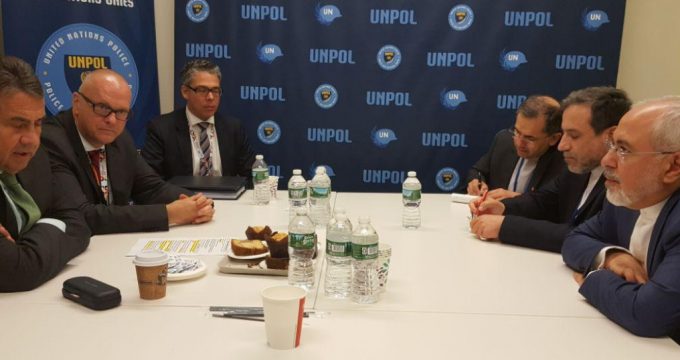 IFP- Iranian Foreign Minister Mohammad Javad Zarif has held talks with his French and German counterparts on the sidelines of the UN General Assembly in New York.

“Supporting the JCPOA and the need for all parties to remain committed to this multilateral and international agreement has always been Germany’s transparent stance,” Gabriel noted.

The two top diplomats also stressed that any damage to the deal would send a bad signal to the international community and cause distrust of any international negotiation and deal.

Zarif also discussed issues of mutual interest with France’s FM Jean-Yves Le Drian in a meeting on Wednesday, where they conferred on bilateral relations between Tehran and Paris.

They also exchanged views on regional issues, particularly the referendum on Iraqi Kurdistan’s independence, and underlined the necessity of maintaining Iraq’s territorial integrity and respecting the Arab country’s Constitution.