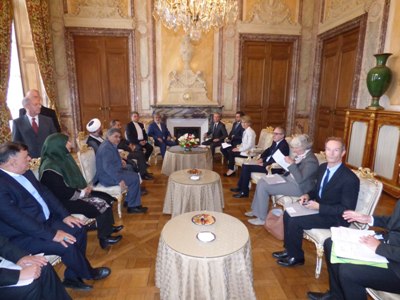 IRNA – Vice-Speaker of Iran’s Majlis (Parliament) Ali Motahari discussed issues of mutual interest and ways to expand parliamentarian ties in a meeting with François de Rugy President of the National Assembly of France on Tuesday.

He arrived in Paris Monday evening to meet French officials and discuss ways of expanding ties.

On his arrival, in an exclusive interview with IRNA, Motahari said that over the last two years significant political and economic developments have been made between Iran and France and therefore Tehran wishes to expand this cooperation.