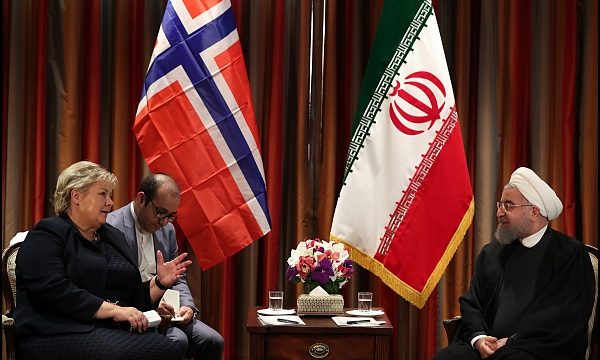 September 20, The Iran Project – On the third day, in continuation of his meetings since his arrival in New York on Sunday (Sep 17) to attend and address the 72nd session of the United Nations General Assembly, President Hassan Rouhani has conferred with a number of top world leaders from Japan, Bulgaria, Belgium, Norway and Pakistan as well as a group of American foreign policy experts.

While addressing a group of American foreign policy experts in New York, Iran’s President Rouhani says violation of international agreements reached among countries will stoke chaos and lead to bullying and use of military force in the world.

He added that if international accords were supposed to be violated because an individual does not like them, no one would seek to find a solution to global issues through diplomacy and “this will amount to inviting the world to chaos, muscle-flexing and [use of] military power.”

Rouhani emphasized that the International Atomic Energy Agency (IAEA) has in all its reports verified Iran’s compliance with its commitments, including those related to Arak heavy water reactor, under the nuclear deal, known as the Joint Comprehensive Plan of Action (JCPOA), which was clinched by Iran and the P5+1  group of countries in 2015.

In a meeting with the Japanese Prime Minister Shinzo Abe, Rouhani said that Japan’s firm support for the landmark nuclear deal helps strengthen regional peace and stability, adding that: “We should not allow just a single country damage the nuclear deal arbitrarily while it was made by the efforts of seven countries and is an international agreement”.

Meanwhile, the Japanese prime minister, for his part, reaffirmed Tokyo’s support for the nuclear deal, adding that Iran serves as a pivot country in the Middle East and Japan urges all parties to remain in compliance with the deal.

Michel, for his part, said Belgium is eying expansion of ties with Iran and Belgian companies are also interested in investing in the country.

Rouhani said in a meeting with his Bulgarian counterpart Rumen Radev that economic and private sectors in the two countries should be encouraged and supported to strengthen their ties and enhance cooperation.

Meantime, the Bulgarian President praised Iran regional policies, saying the ‘stabilizing and successful policies adopted by Iran in the region is the reason encouraging Sofia to seek to enhance ties in different fields with the country.’

In a meeting with Prime Minister of Pakistan Shahid Khaqan Abbasi, President of Iran said the country is prepared to supply Pakistan’s needs for energy and to construct power plants across the border areas to export electricity to its neighbor.

For his part, Abbasi said Pakistan is trying to settle Iran’s concerns about the borders and has deployed Army troops to the frontiers to ensure security.

In a meeting with Norwegian Prime Minister Erna Solberg, Rouhani emphasized boosting economic relations’ level between Iran and Norway, saying post-sanction era has paved the way for both countries to promote economic relations in different fields.

Solberg, for her part, welcomed broadening of Iran-Norway ties, and said Norway is committed to JCPOA.