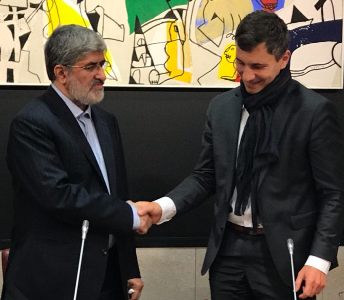 IRNA – Parliament Vice-Speaker Ali Motahari in a meeting with President of Cultural and Education Affairs Committee of the National Assembly of France Bruno Studer discussed ways to broaden parliamentary relations.

During the meeting, Motahari underlined the need to expand cultural ties between Iran and France, and expressed the hope that the meeting would pave the way to develop cultural and educational cooperation.

He pointed to the long background of cultural ties between the two countries, and said Iran and France may cooperate on many issues like cinema, music and cultural heritage.

Considering anti-Iran sentiment in the west, Motahari proposed that holding cultural week between the two countries would prepare the grounds for cultural recognition between the two nations.

Studer welcomed Motahari’s proposal, and said that culture is a turning-point to create cordiality among nations.

Motahari, heading a parliamentary delegation arrived in Paris on Monday evening in order to develop parliamentary relations between the two countries.

Motahari is due to meet with President of culture, education and communication commission of the Senate as well.

Concerning the aim of the visit, Motahari told IRNA that politico-trade ties between the two countries in the past two years had good promotion and Tehran intends to develop its ties in this direction as well.